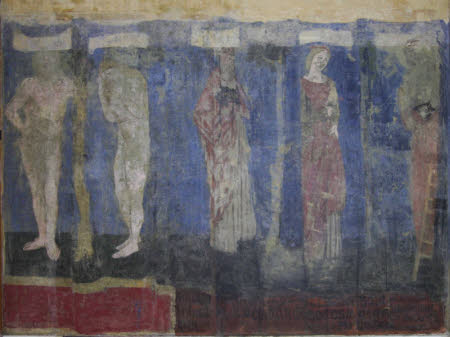 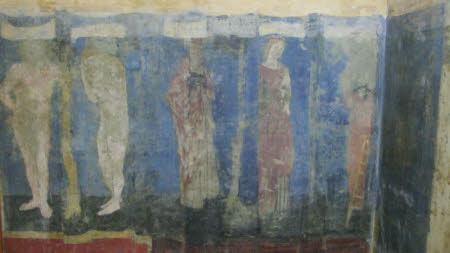 Removal of wallpaper and recent major conservation work has revealed this entire wall painting. Originally only two indistinct figures were discovered behind a fitted wardrobe. It is on the wall of the bedroom that was occupied by William Morris and his wife Jane at Red House where they lived between 1860 and 1865. It is thought to be designed by Morris but executed by Elizabeth Siddal and, possibly, his other Pre-Raphaelite friends who stayed there and decorated. It shows five biblical figures from Genesis, the first book of the Old Testament. Adam and Eve are seen standing next to the tree of good and evil with the serpent of temptation below. Noah is seen holding a small ark representing that which saved his people from the flood. Jacob stands next to the ladder of his prophetic dream with the figure of Rachel, Jacob's favourite wife and Joseph's mother, standing between them.

Tempera painting on plaster, Adam and Eve, Noah, Rachel and Jacob, possibly by Elizabeth Siddal (1829 - 1862), 1861/2. A mural, painted as if it is a wall hanging showing the folds of material, of biblical figures from the Old Testament's Book of Genesis and complete with tree and serpent, ark and ladder. Lines of words from Genesis have also been uncovered through conservation: 'And Noah did according unto all that the Lord commanded him' (Genesis 7:5); 'And Rachel said, God hath judged me, and hath also heard my voice' (Genesis 30:6); 'And he dreamed, and behold a ladder set up on the earth' (Genesis 28:12). It is not known for certain the precise authorship of the figures. Whilst staying at Red House, Elizabeth Siddal recorded that she was engaged in painting a figure. But also in 1861, Ford Madox Brown designed a stained glass window with the figure of Noah cradling an ark for Jesus Church, Troutbeck, Cumbria as one of the newly-established 'Firm's (Morris, Marshall, Faulkner & Co.) earliest commissions for which this figure of Noah could be a prototype. The painting is designed to represent a tapestry, fixed at seven points along the upper part of the south wall, hanging in swags below. The body of the tapestry includes five figures, broadly painted in two groups. From the right there is Jacob with his ladder, Rebecca, and Noah holding a small arc, separated by spindly trees and standing on a green lawn, set again a blue background. Below them is a text from the King James Bible, while over each figure there is a scroll which would originally, it is presumed, have been inscribed with a name. To the left is a second group showing Adam and Eve, on either side of a tree, twisting around which there are the fragmentary remains of a red snake. Adam has his left hand raised to his face and holds an unidentified object in his left hand. Eve has both hands raised to her face. Like the other figures they stand on a grassy lawn, but below there is a red border with no text.