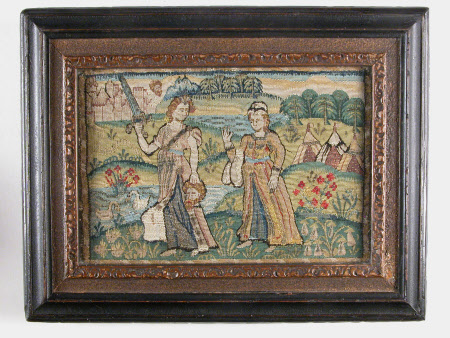 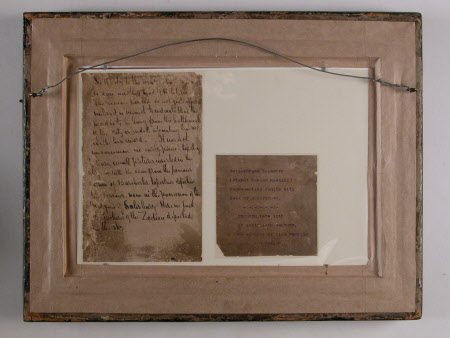 A small tapestry showing Judith with the head of Holofernes, finely woven with silk and gold thread. Formerly thought to have been made at the workshop established by Ralph Sheldon in Barcheston, Warwickshire, the origins of the tapestry may in fact be more mysterious.

Tapestry, wool, silk and metal thread, 8-10 warps per cm, framed, Judith with the Head of Holofernes, English, c. 1580-1610. Small tapestry panel with Judith and her maid standing in a colourful landscape. Judith holds a sword in her right hand and Holofernes’s head in her left hand, and Judith’s maid has a sack draped over her left arm which is raised. The figures stand on a grassy foreground field decorated with flowers. Immediately behind Judith on the left are two swans on a river, and on the right three tents can be seen. In the left background is the city of Bethulia, with Holofernes’s head suspended from the ramparts; trees fill the rest of the horizon. The panel has a narrow border with diagonal stripes in three colours.