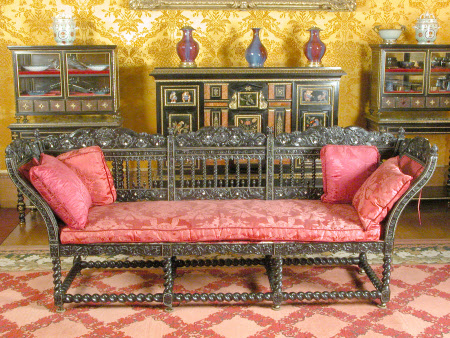 An Indian carved ebony settee, Coromandel coast, c 1700. A carved ebony settee with a long rectangular seat. The top rail and sides are inlaid with ivory and carved with flowers, mythological figures, animals and masks. The inlaid ivory forms eyes for the characters in the carvings. Each corner is surmounted by a carved bird (some missing their heads), the sections in between are surmounted by double headed birds. Between the two rails are twist-turned balusters interspersed with small finials with ivory tops (some missing). The out swept sides are padded and upholstered in red silk damask. The sofa has eight twist-turned legs, each with a castor, joined by twist-turned stretchers. The settee features a long rectangular squab covered in red silk damask with red braiding to edges. Two square cushions also covered in red silk damask with red braiding. Two smaller cushions also covered in red silk damask with red braiding. All removable. This sofa was acquired by George-Hammond Lucy in 1837 according to a bill in the Warwick Records Office (L6/118). It was purchased from Graham in London for £109 7s 6d and is described as an ‘Ebony Queen Elizabeth Sofa upholstered in crimson damask’. The mid-seventeenth century ebony furniture produced in the Coromandel coast of India was very fashionable in the early years of the nineteenth century, especially sets of carved ebony chairs. In the 1750s Horace Walpole (1717-1797) acquired many pieces of such carved furniture for his Gothic house of Strawberry Hill. He believed they were surviving examples of early English furniture. William Beckford (1760-1844) also had several examples of carved ebony chairs and cabinets at Fonthill Abbey. At Charlecote a few specimen can still be found (NT 533024.1-2; NT 533025; NT 533026).

Jaffer 2001 : Amin Jaffer, Furniture from British India and Ceylon, a catalogue of the collection in the Victoria and Albert Museum and the Peabody Essex Museum, London, V&A publications, 2001.