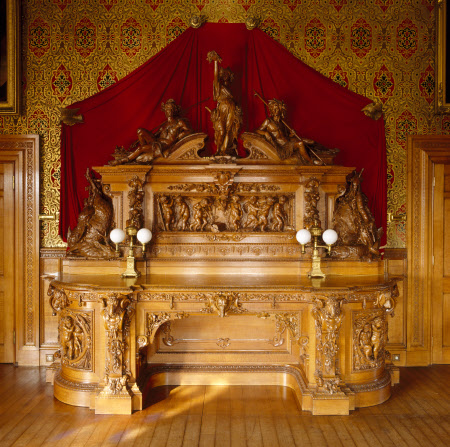 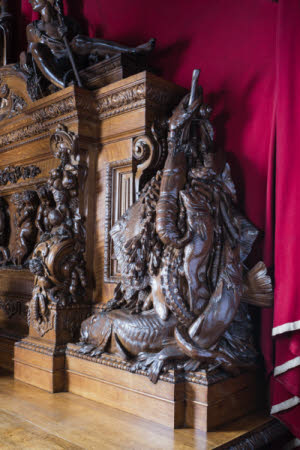 This colossal sideboard, known as the Charlecote Buffet, is one of the most extraordinary examples of mid-Victorian woodwork. It was carved by J.M. Willcox and his apprentices of the Warwick school of virtuoso carvers. It represents the fruits of nature and of hunting, together with figures of a fisherman and a hunter. The central panel depicts the progress of agriculture, and in the centre above it is the figure of Ceres, the goddess of corn. The sideboard cost Mary Elizabeth Lucy the huge sum of £1,600 in 1858 and was used to display silver plate. The glow from the fitted Argand oil lamps would have added to the effect.

A large oak sideboard, highly carved with representations of the resources of nature and the trophies of the chase, surmounted by a female figure of plenty flanked by a pair of male figures: a fisherman (holding a rod) and a hunter (holding a spear). It opens with three frieze drawers: two curved corner drawers and one long drawer. Each drawer features a dog’s head and two drop pendant handles. There are a pair of corner cupboard to each side, opening to an interior shelf. The corner cupboards feature three carved cherubs. Red baise cloth with gilt braid, hung from two rose shaped brass finials and two giltwood doves. (NT 534126) Carved between 1853 and 1858 by James Morris Willcox (died in 1859) and his assistant Thomas Henry Kendall. It was purchased by Mary Elizabeth Lucy in 1858 for the Dining Room at Charlecote at a cost of "£1,600". A great example of mid-nineteenth century craftsmanship, it was presented to Queen Victoria during her visit to Warwickshire. it can be paralleled with the "Kenilworth sideboard" (Warwick Castle) designed and executed to illustrate Walter scott's novel by Cookes of Warwick and presented at the London Great Exhibition in 1851. Both pieces illustrate perfectly the works produced by a few woodcarvers established in Warwick at the time, later referred to as the "Warwick school". In her Biography of the Lucy Family, Mary Elizabeth writes a long paragraph giving the story of her acquisition: "On the occasion of the Queen's coming to Warwickshire, Lord Leigh, and many more, proposed getting up a subscription to present Her Majesty with a magnificent carved oak sideboard, then exhibited for sale by Wilcox, of Warwick; the price for which was two thousand pounds. But the Queen declined receiving any token of our loyalty. I afterwards made Spencer [her son, Henry Spencer Lucy] a present of this very sideboard , and it now stands in the dinner-room. My dear husband [George Lucy] was one of Wilcox's first and greatest patrons, and he employed him to execute all the carvings in the library and dinning-rooms, and Wilcox never forgot his kindness to him (...). His most anxious wish was that this sideboard, his finest work, should come to Charlecote, and in a note I received from him (...) he says, "I assure you nothing gives me greater pleasure when I think the sideboard is at the place I always wished it to be. I assure you I made it to fit the room, and always hoped I might see it there". This fine work of art was a labour of love to the projector for more than five years (...). This sideboard may truly be pronounced a masterpiece of genius and skills. The trophies of the chase, the sea, the river, and the clustering bunches of the grape and the hope, bring before us the natural productions of our English counties in all their genial and homely comforts." (p.198-199). Purchased by Mary Elizabeth Lucy (1803-1889) from Wilcox in 1858. In the Dining Room at Charlecote ever since.

Lucy 1862 Mary Elizabeth Lucy, Biography of the Lucy Family, of Charlecote Park, in the County of Warwick, London, 1862