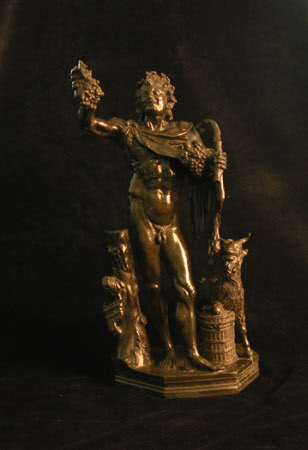 Bronze on marble plinth, Bacchic Faun (Faun in Rosso Antico) by Giovanni Zoffoli (c.1745-1805), plinth inscribed 'G Z F' . Figure of a Bacchic faun with goat's fleece over shoulder, holding grapes with a goat, basket and pan pipes. It is a reduction of from the famous statue in rosso antico excavated by Monsignor Furietti at Hadrian's Villa in 1736, and given by Pope Benedict XIV in 1746 to the Museo Capitolino, Rome where it gives its name to the Stanza del Fauno. Another reduction is at Woburn Abbey, Bedfordshire, having been bought by Francis Russell, Marquess of Tavistock in about 1762/3. A cast was bought by Charles Tatham for Carlton House in 1795.

bequeathed to the National Trust by Huttleston Rogers Broughton, 1st Lord Fairhaven (1896-1966) with the house and the rest of the contents