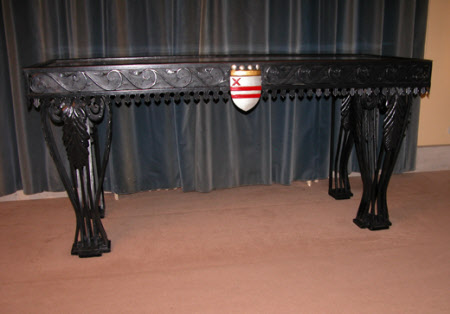 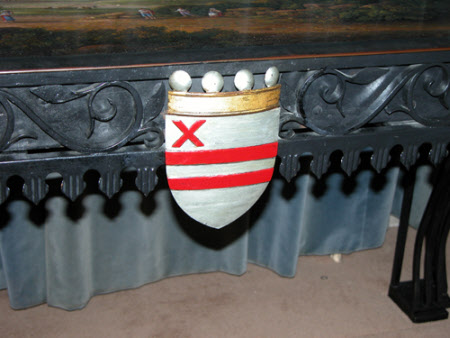 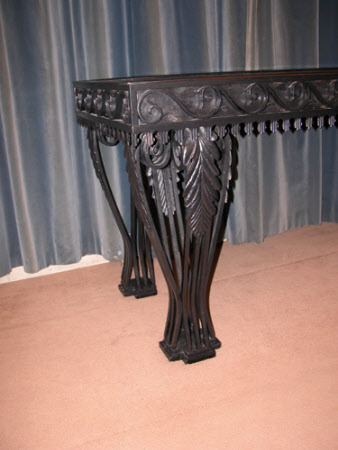 A large micro mosaic panel depicting the ancient Greek and Roman ruins at Paestum, by Gioacchino Rinaldi (fl.1775-1825) Italy, circa 1820 Mounted on a wrought iron base made by George Lister, Cambridge, circa 1960 The picture depicts three ruined temples in a landscape, with grazing cattle and a herdsman. In the left foreground is a pile of stone ruins and on the right two trees. Five farm worker figures are seated and standing in the lower foreground. The mosaic is signed in the lower right 'G.Rinaldi F. The panel is mounted on an iron frame with a Vitruvian scroll frieze centred by the Fairhaven shield.

The three ruined temples are the remains of an ancient Greek colony near Naples called Poseidonia. In 273 BC the Romans conquered the settlement and renamed it Paestum. The ruins were rediscovered and excavated in the 18th century and attracted tourists from across Europe and Great Britain. Micro mosaics are a special form of mosaic that uses unusually small mosaic pieces (tesserae) of glass, or in later Italian pieces an enamel-like material, to make small figurative images. Surviving ancient Roman mosaics include some very finely worked panels using very small tesserae, especially from Pompeii. The modern micro mosaic became popular from the end of the 18th century, reaching the height of popularity in the mid 19th century, when Rome was the centre of production. There was a Vatican Mosaic Studio from 1576 set up to create mosaic replicas of the altarpieces in St Peter's Basilica, which were being damaged by the humid conditions. Micro mosaics were popular purchases by visitors on the Grand Tour, easily portable, and often taken home to set into an objects such as boxes or jewelry. The size of this panel is very unusual and would have been set into a table base,as in this case, or framed and hung on a wall. Typical scenes were landscapes of Roman and Greek views. An almost identical micro mosaic from the Rosalinde & Arthur Gilbert Collection is currently at The Israel Museum, Jerusalem - museum no.BO3.0344 See:Gonzalez-Palacios, Alvar. The Art of Mosaics: Selections from the Gilbert Collection. Los Angeles County Museum of Art 1977. 143 p., Ill. Cat. No. 34. also: 'Bizarre Perfection', Israel Museum exhibition catalogue 2008/2009 James Weedon (October 2017)

Part of the Fairhaven Collection. The house and contents were bequeathed to the National Trust in 1966 by Huttleston Rogers Broughton, 1st Lord Fairhaven (1896-1966)