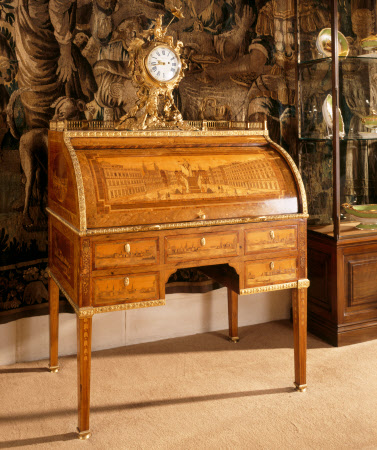 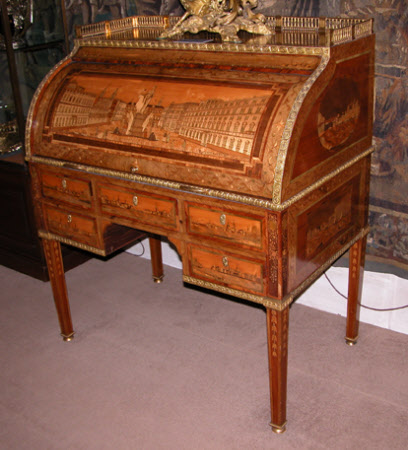 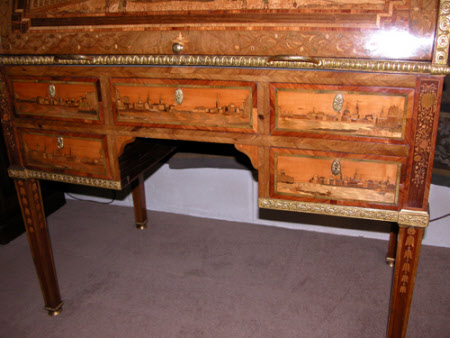 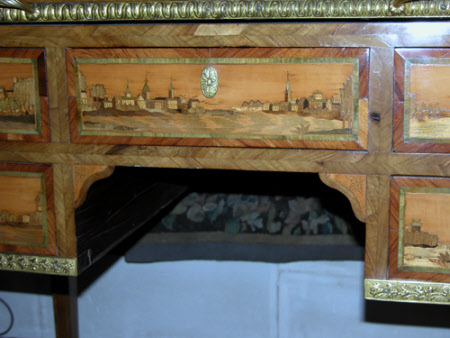 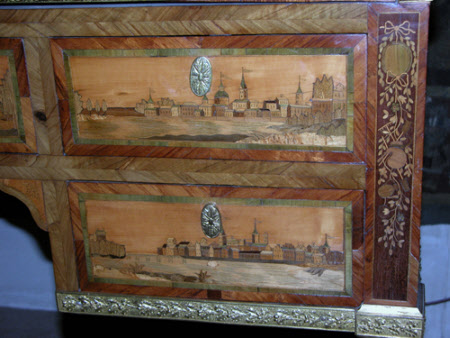 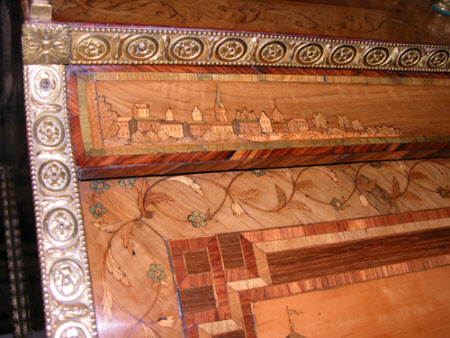 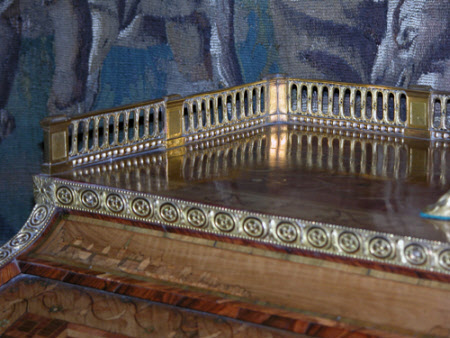 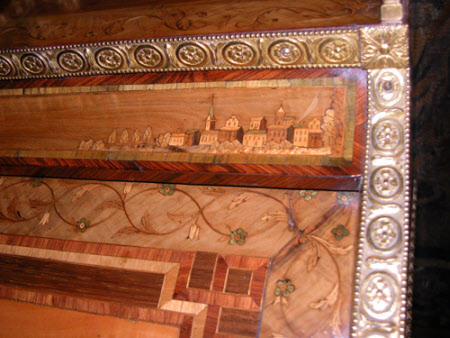 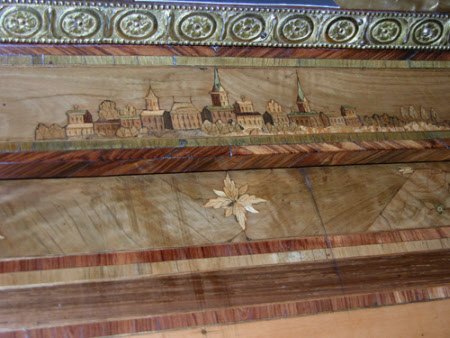 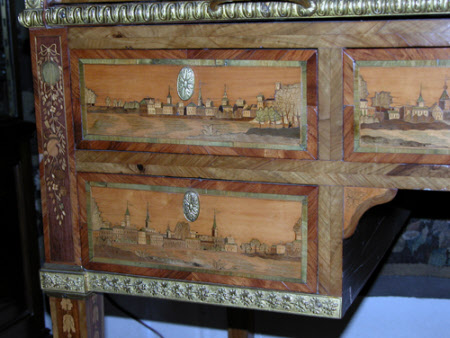 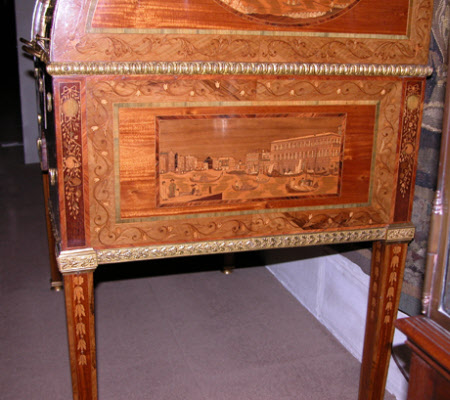 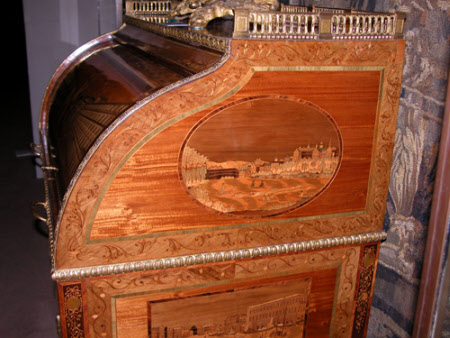 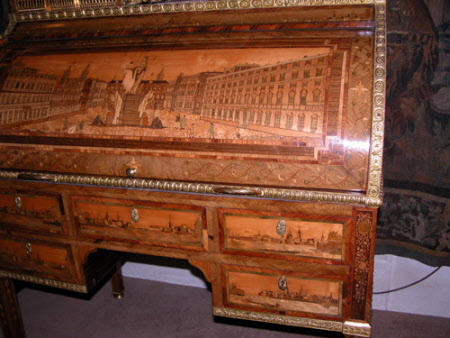 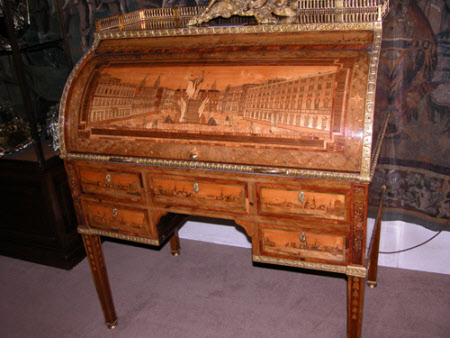 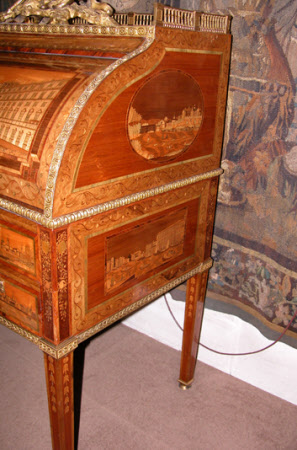 This bureau à cylindre (roll-top desk) was made in the late eighteenth century for one of the St Petersburg palaces of Tsar Paul of Russia. It is decorated with satinwood marquetry of superb quality, depicting Russian townscapes. The style of the ormolu mounts and the marquetry both suggest that it was made in Russia, where there was a strong demand for such ornate work.

A marquetry inlaid karelian birch, tulipwood, fruitwood and gilt bronze mounted cylinder-top desk or bureau à cylinder, Russian, circa 1780. The raised rectangular top with a gilt brass balustrade and inlaid with an oval panel depicting fishermen at work with a townscape in the background. The panel flanked by inlaid arabesques incorporating vases of flowers all within a cross-banded border. The cylinder fall inlaid with a town square with a monumental female statue in the centre raised on a plinth. The cylinder opens with a mechanism which extends a writing surface also inlaid with an oval panel depicting fishermen and within further inlaid arabesques and floral filled vases. The interior is fitted with nine drawers and six open recesses around an inlaid cupboard door itself fitted with a shelf and a small drawer. With five further drawers arranged around the kneehole and raised on square section tapered legs, inlaid with bell flowers and with brass cap feet. The whole with applied cast brass mouldings and handles. The sides inlaid with conforming decoration.

Bearing a paper insert to one of the drawers 'Rudolph Lepke's Sales Rooms, Berlin, W. 35. catalogue 2013’ Marked to the underside with a paper label 'Set 204' and an unreadable ink stamp Previously wrongly attributed to David Roentgen, who worked extensively for the Russian court. According to the sales catalogue the desk was included in ‘ Works of art from the possession of the Museums and Palaces at Leningrad’ Wednesday June 5, 1929. 10a.m. No. 177. Bureau a Cylindre of Tsar Paul I, Paris, circa 1780.' This cylinder top desk was made in Russia around 1780, possibly for one of the palaces of Tsar Paul I of Russia in or around St Petersburg, although there is no documentary evidence to substantiate this claim. It is inlaid with marquetry depicting both Russian and Italian cityscapes, including Rome with a prominent representation of the Temple of Hercules Victor. It was not unusual for Russian pieces of that time to show Italian cities, the engravings of which had found their way to Moscow and St Petersburg. Russian cabinet makers had an extensive choice of indigenous timbers at their disposal for marquetry work, including fruitwoods, birches, walnut, hazel etc. and more often than not used these rather than the scarcer imported woods such as kingwood, mahogany, rosewood etc. Karelian birch was widely used by Russian craftsmen as it has exceptional qualities for marquetry inlay and was also often used as a ground timber as it has a mottled appearance and often the grain is distorted to give the illusion of movement and depth. Interestingly there is a clear distinction between the rather crude cityscapes (there are much better examples in Russian palaces) and the much finer scrolls, which are not dissimilar from the work of the court cabinet maker Christian Meyer (b. 1750, fl. 1795). A similar style of scroll work is present on a card table illustrated in ‘From Paris to St. Petersburg’ an exhibition and sale of important French and Russian works of art 6-31st October 1998 no. 22. See also an exhibition catalogue from Peterhof ‘Adorned with colour woods. Russian Marquetry Furniture of Catherine the Great's Epoch’ held in 2015 (from a private collection), which illustrates two comparable bureaux. The gilt bronze mounted example is attributed to Matvei Yakovlevitch Veretennikov (fl. 1790s), who was a serf belonging to Count Satykov and who produced two large roll-top desks, (one kept at Tsarkoie Selo, the other at Gatchina), given to Catherine the Great, which have large figural marquetry scenes, the quality of which is higher than the marquetry on Lord Fairhaven's desk. ‘The Art of Marquetry in Eighteen Century Russia’, Sovietskaya Rossia Publishers 1989, compare landscape marquetry on furniture by Matvei Veretennikov and Nikifor Vasilyev from the 1780's and 1790's. James Weedon (September 2018)

By repute the property of Tsar Paul I of Russia Probably sold by Rudolph Lepke's Kunstauctionhaus, Berlin 5th June 1929, lot 177 Bequeathed to the National Trust by Huttleston Rogers Broughton, 1st Lord Fairhaven (1896-1966) with the house and the rest of the contents.

Drawer, and under kneehole: Bearing a paper insert to one of the drawers 'Rudolph Lepke's Sales Rooms, Berlin, W. 35. catalogue 2013’ Marked to the underside with a paper label 'Set 204' and an unreadable ink stamp