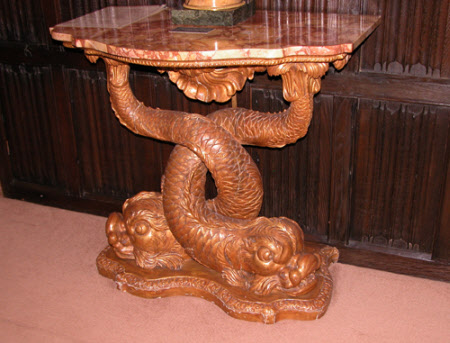 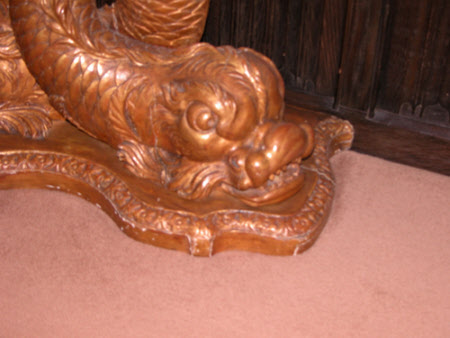 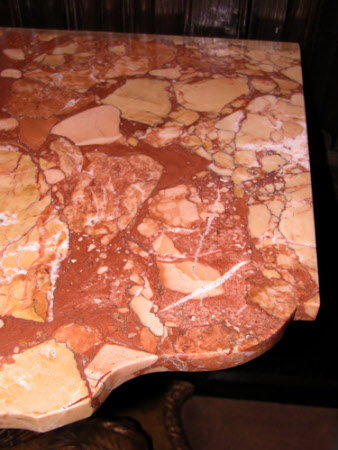 A pair of giltwood and marble side tables, in the manner of William Kent, London, circa 1735 With a shaped Brescia marble top with serpentive front edge above a shallow rope twist carved frieze centred by a scrolled shell motif and raised on twin supports modeled as entwined mythical sea creatures or 'dolphins'. The inverted serpentine shaped plinth base with flower head carved edge. Bearing a label 'Harris 110 11' which indicates that the tables were once in the possession of the early 20th century antique dealer Moss Harris who sold furniture to many well known collectors of English Furniture such as Lord Leverhulme.

A silver salt cellar in the V&A collection (no. 161-1879) by Sebastiano Juvarra dating from the late 17th century has very similar designs of mythical sea creatures or 'dolphins' and fish scale patterns. Giovanni Giardini (1646 - 1722) also produced similar patterns and Kent would certainly have been familiar with these designs. He often chose this type of decoration for the legs of seat furniture and console tables. The stylized 'dolphin' is incorporated into many designs of this period and throughout the 18th century, a suite of at least twelve tables commissioned for George Granville Leveson-Gower, Marquess of Stafford and 1st Duke of Sutherland, for Cleveland House, later renamed Bridgewater House, in London were produced by Marsh and Tatham circa 1803. See: V&A collection no. 161-1879 Weber, Susan 'William Kent, designing Georgian Britain' Yale 2013 James Weedon (October 2017)

Possibly bought from Moss Harris and Son, Oxford Street, London Bequeathed to the National Trust by Huttleston Rogers Broughton, 1st Lord Fairhaven (1896-1966) with the house and the rest of the contents.