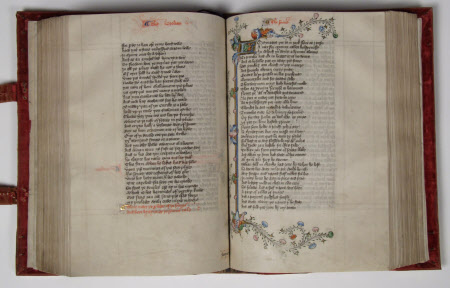 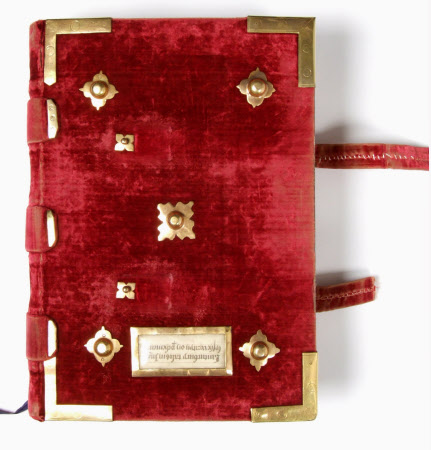 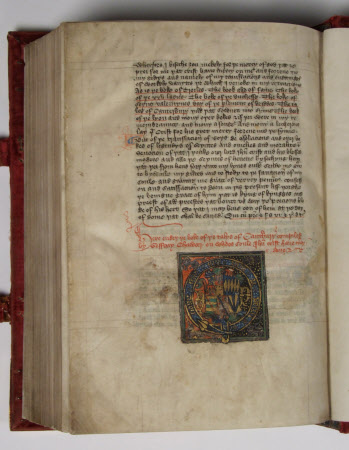 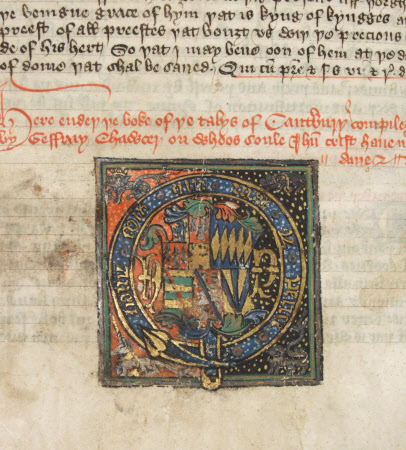 An illuminated manuscript known as the Leconfield Chaucer, in black and red script on vellum of 307 leaves, 36-38 lines per page, full border on folio with red velvet covers. Written in England in one hand. The dialect and spelling include a significant number of West Midland and North Midland forms. Initials (i) to tales, in pink and blue shaded with white, on decorated gold grounds, each with a bar of gold and colours running the height of the written space prolonged into sprays in top and bottom margins, or, f.I, full frame; (ii) to prologues, links and some divisions in tales, 2- or 3-line, in gold, on grounds of pink and/or blue patterned with white; with short marginal sprays; (iii) to stanzas, I-line, blue with red ornament, or gold with greyish-violet ornament. Binding of contemporary (?) wooden boards, each with four metal corner-pieces and five bosses, now covered with s.xviii/xix red velvet; two strap-and-pin fastenings, one strap missing; There is a 15th century parchment label under horn on the back cover which reads - 'Canterbury talis in [Inglyshe?]or [Inglisshe?] writyn on p[ar]chement', s.xv, on a slip covered with horn fastened to the back cover in a metal frame. Secondo folio 'For he was'.

The manuscript was written in England between 1420 and 1440, but scholars disagree as to the precise date. It may have been made for the 3rd Earl of Northumberland (1421-1461) or for the 2nd Earl (1394-1455), who was married to Eleanor Neville, Chaucer's great-niece. However, it is equally possible that the manuscript was bequeathed by Sir Thomas Cumberworth to his great-niece, whose husband acted as an agent for the 4th Earl of Northumberland. Towards the end of the fifteenth century the arms of Henry Percy, 4th Earl of Northumberland, d.1489 in a Garter, to which he was admitted in 1474 were painted in at the foot of the final leaf. They were later additions but they show that the book belonged to the 4th Earl at sometime between 1474 (when he received the Garter) and his death in 1489. Descended via Lady Elizabeth Percy, daughter of the 11th Earl (and last Percy Earl) to her daughter, Lady Catherine Seymour, who married Sir William Wyndham and who inherited Petworth. Believed to have been at Petworth for at least four hundred years. By descent, until the death in 1952 of the 3rd Lord Leconfield, who had given Petworth to the National Trust in 1947, and whose nephew and heir, John Wyndham, 6th Lord Leconfield and 1st Lord Egremont (1920-72) arranged for the acceptance of the major portion of the collections at Petworth in lieu of death duties (the first ever such arrangement) in 1956 by H.M.Treasury then by descent.