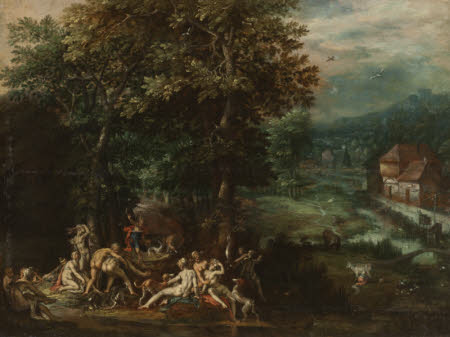 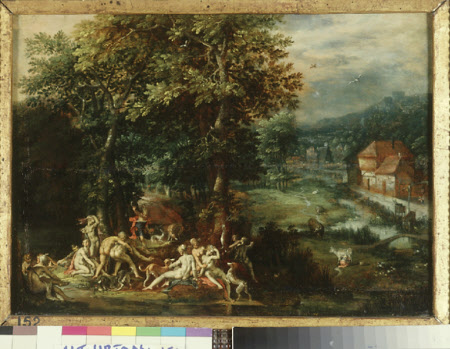 This scene from classical mythology has been set within a landscape, with contemporary dwellings. Diana, the virgin huntress, goddess of the sky and the earth, is shown being surprised by the young hunter, Actaeon. The Roman poet Ovid describes how Actaeon stumbled upon her grotto, where she and her nymphs were bathing. To punish him for seeing her divine nudity, Diana transformed him into a stag, and he was pursued and torn to pieces by his own hounds. It has been suggested that this painting was originally a pure landscape to which the figures were added. There appear to be strips of wood added at the bottom and on the left to help accommodate them.

Oil painting on oak panel, Diana and Actaeon, manner of Joachim Wtewael (1588-1638). Diana and her nymphs in the foreground are surprised by Actaeon approaching from an avenue behind them; right, a valley with a stream and cottages, and a wooded hill beyond. The mythological tale of Diana and Actaeon is set here in a Northern landscape. Actaeon is shown stumbling across the clearing where Diana and her companions are bathing. As punishment for glimpsing her divine naked body, Diana turned Actaeon into a stag and he was chased and killed by his own hounds.

Acquired with the Rape of Proserpine (then called Dosso, but now attributed to Sustris) from the Arcade Gallery, in exchange for the two other pictures and an additional £100; given with Upton House to the National Trust by Walter Samuel, 2nd Viscount Bearsted (1882 – 1948) shortly before his death in 1948