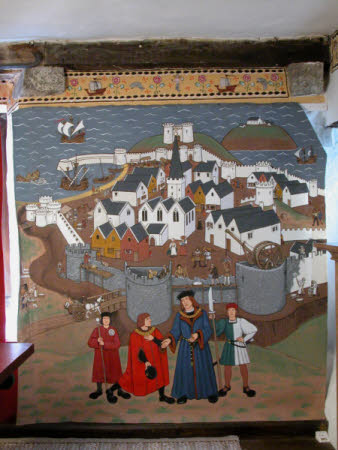 Linseed oil paint on linen, The Rebuilding of the Town Walls of Tenby in 1457 under the Patronage of Jasper Tudor, Earl of Pembroke (c. 1431 – 1495) by Anthony Barton, 2011/12, as it might have been represented in about 1500. A painted cloth wall painting depicting four male figures in the foreground: Jasper Tudor, one of Tenby's greatest aristocratic patrons, dressed in blue; the kneeling figure of John White, father of Thomas who was mayor in 1457; a figure holding a staff represents one of the two bailiffs of Tenby; and the guard in green and white Tudor livery. Immediately behind them the South West Gate of Tenby (now known as the 'Five Arches'. In the background is the walled town of Tenby. The painted cloth is a coarse linen painted with linseed oil paint. Painted or 'stained' cloths, were a popular and very much cheaper alternative to tapestries, often recorded between the later 14th and the later 17th centuries, with a peak of popularity during the Tudor period. Like the tapestries they imitated, they might depict foliage patterns, hunting scenes, religious and subjects or 'histories'.

The cloths were devised by Anthony Barton of York and Charles Kightly and painted by Anthony Barton in 2011-2012. The painted cloths comissioned for the Tudor Merchant's House are not copied from originals, but are intended to represent the kind of painted cloths which the so far unknown inhabitant of this house might have displayed on his walls in c1500. They depict two important events in Tenby's imediate past history.