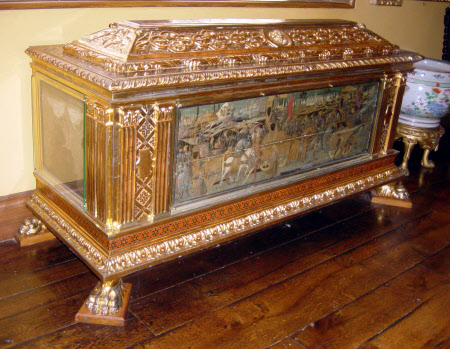 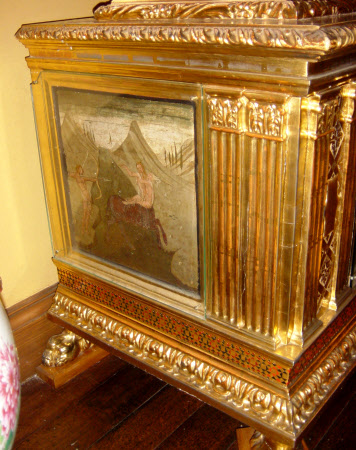 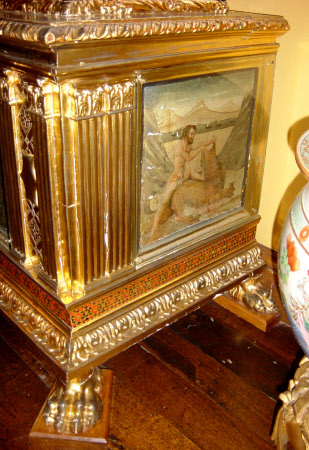 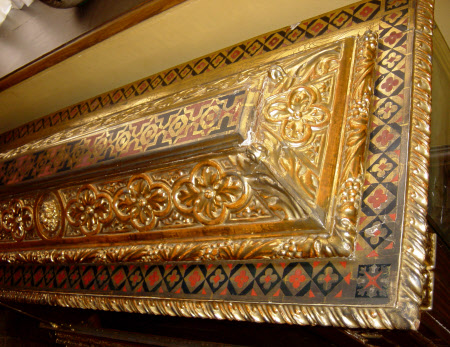 A gilt wood and painted Cassone or marriage chest. Italian, Florence, mid 15th century. The imbricated hinged lid with a raised central panel decorated to the top with a polychrome geometric design and with tapering body carved with repeating quatreform floral motifs The outside of the lid with further polychrome design and with a gadrooned carved edge. The body of the cassone having a central tempera painted panel depicting three Kings drawn in chariots in a triumphal procession. Flanked by twin reeded Corinthian carved pilasters. The right side painted panel depicting Hercules slaying the Nemean Lion and the left side panel depicting The rape of Deianeira with Hercules drawing his bow at Nessus. Each flanked with conforming Corinthian pilasters. Below the panels a further band of geometric polychrome decoration and a leaf carved moulded edge. The whole raised on four lions paw feet. Some embellishment additions in the 19th century.

Cassoni ranged in form from the standard trunk or coffer, with rounded lid, to more elaborate creations and were part of the paraphernalia of marriage. Inventories reveal that cassoni were usually, though not exclusively, listed in pairs and mainly kept in bedrooms, as recorded in the inventories (1498–1516) of the Medici palaces in and around Florence. They were passed through the generations as both functional and decorative pieces of furniture and would have been used for storing both household and precious items, including linens and fine textiles. By the mid-fifteenth century, the classic Florentine Quattrocento type was of carved and gilded wood, with an imbricated lid and incorporating three panel paintings: a single oblong panel on the front, with two smaller panel paintings on the sides. Just as the subjects of cassone paintings were often inspired by Greek and Roman Antiquity, so the carved and gilded woodwork was all’antica, reflecting the Renaissance revival of classical architecture and interior decoration. It is thought that this cassone was brought back from Italy in 1861 by William Kerr, 8th Marquess of Lothian (1832-1870) to his family seat, Newbattle Abbey, Midlothian. William Blundell Spence (1814-1900) was a painter, collector and dealer who was living and working in Florence from the 1840s. He is known to have encouraged, and may well have been the driving force behind the taste for cassone in the 19th century selling several examples to eminent British collectors. Lord Lothian was both a friend and client of Blundell Spence and is known to have bought several paintings from him, it is quite likely that the cassone also came through his hands. It was always believed that the body of cassone was a 19th century copy which had been constructed to incorporate the 15th century Florentne painted panels, this was the fashion at the time and fairly common practice in 19th century Italy. Examination of the cassone during its conservation revealed that the carcass and the lid are essentially original, together with the horizontal plank at the back which was intended to support the weight of the lid and that the paw feet may also have belonged. However, all the decorative carving was added in the nineteenth century when many cassoni were broken up to create grander versions of the same thing or simply to detach the painted panels The three painted panels of the Blickling cassone belong to the same chest from which its early woodwork derives. The front panel painting is directly painted on to the two boards making up the underlying structure of the front and the butt-joined and nailed joints with the end panels appear to be original and undisturbed. The side panels also rest directly on the structural timbers, so the paintings are not on a separate support and have not been attached at a later date. It was also noted during the conservation process that x-rays showed the chest had once been fitted with a lock, since covered up. (James Weedon 2016)