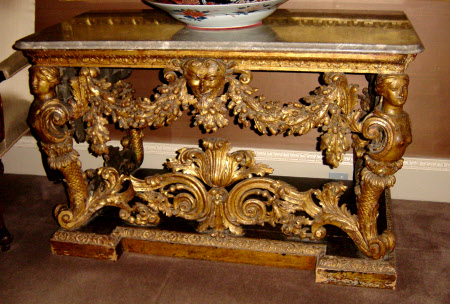 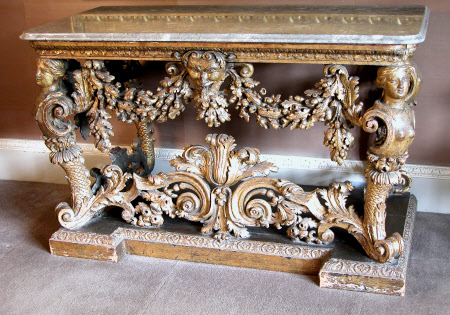 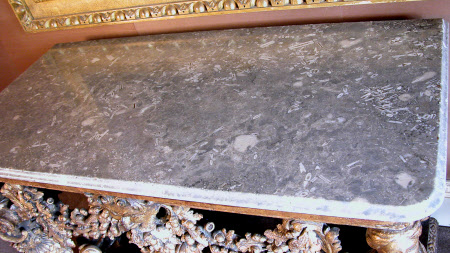 A carved giltwood console table, English, circa 1740, in the manner of William Kent. The later rectangular marble top above a narrow frieze centered by a carved satyr mask and garlands of oak leaves with acorns. All four corners supported by caryatids with C scroll decoration and stylized palm trees, terminating in scroll supports. With a further carved lower stretcher incorporating scrolls and floral decoration. The inverted breakfront plinth base with carved moulded edge. With some reconstruction. Grey fossil marble top (not original).

Label on inside of front left hand side edge 'Frank Partridge, Works of Art, 28 Kings St, St James's and New York'. Founded in 1900 by the present Frank Partridge’s great grandfather, the business opened a gallery almost opposite Christie’s in King Street, London dealing in the very finest English and French furniture and Chinese porcelain and in circa 1912 opened a shop in New York, on Fifth Avenue. When the London premises were bombed in 1939 Frank Partridge moved his business to the famous “Partridge” building opposite Sotheby’s in New Bond Street. During this period, Partridge’s received the Royal Warrant as Purveyors of Fine Art to Queen Mary, a frequent visitor to the gallery. Records in the archive of the Burrell Collection show that one of Partridge's earliest customers was the great art collector, William Hesketh Lever (1851-1925) the first Lord Leverhulme. Lord Lever (as he later became known) purchased Chinese porcelain from Partridge for over twenty years. Another important early client was Philip Kerr, the 11th Marquess of Lothian. Lord Lothian and Partridge were friends and he was commissioned to re furnish Blickling Hall