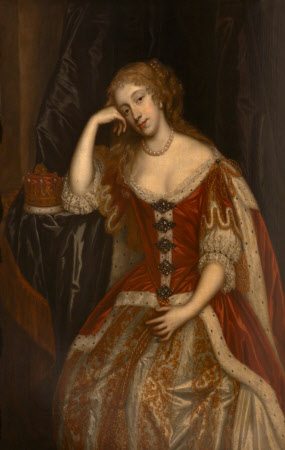 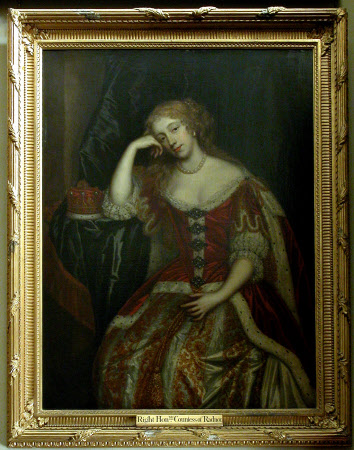 Oil painting on canvas, Letitia Isabella Smith, Countess of Radnor (c.1630-1714) after Sir Peter Lely (Soest 1618 – London 1680), 18th century. A portrait of the right honourable Countess of Radnor, the second wife of the 1sr Earl of Radnor whom she married in 1646/7, seated wearing red velvet dress trimmed with ermine resting right arm on table with coronet. She was the daughter of Sir John Smith, or Smythe, of Bedborough, Kent and his wife, Isabel Rich, youngest daughter of Robert Rich, 1st Earl of Warwick and Sidney's 'Stella'. They had four sons and five daughters, including the Hon. Francis Robartes (?1650-1718), the composer and scientist, whose portrait by Kneller is at Lanhydrock NT); and Laetitia Isabella Robartes, who married firstly, in 1669, the 2nd Earl of Drogheda, and secondly, around 1679, the playwright William Wycherley. After the death of the Earl of Radnor at his celebrated house (previously Danvers House) in Chelsea, the sitter was married, as his second wife, to her Chelsea neighbour Charles Cheyne, 1st Viscount Newhaven (1625-98). Lady Robartes, as she then was, was described by Pepys as "a great beauty indeed", and she is also the subject of a celebrated story in the Memoirs of Count Grammont. According to the latter, she momentarily excited the desires of James, Duke of York, when: "in the zenith of her glory. Her beauty was striking; yet, notwithstanding the brightness of the finest complexion, with all the bloom of youth [sic: it was unusual for a woman in her thirties, after frequent child-bearing, to be so described in the 17th century], and with every requisite for inspiring desire, she nevertheless was not attractive". But her husband resisted all the bribes to connive with his being made a cuckold, until he was finally forced to take her off on a pilgrimage to St. Winifred's Well, which was said to cure women of barrenness, and: "did not rest until the highest mountains in Wales were between his wife and the person who had designed to perform this miracle in London".

Probably by gift from ther sitter's son. The Hon.Francis Robartes, to his wife Penelope's father, Sir Courtenay Pole, 2nd Bt; probably painted for Sir John Wm. de la Pole, since it (and the Kneller of her husband), are both in his livery frames (e.g. sub-Honthorst of Sir John Pole); and thence by descent and inheritance; on loan from the Trustees of Antony since 1961