The Death of Hero and Leander 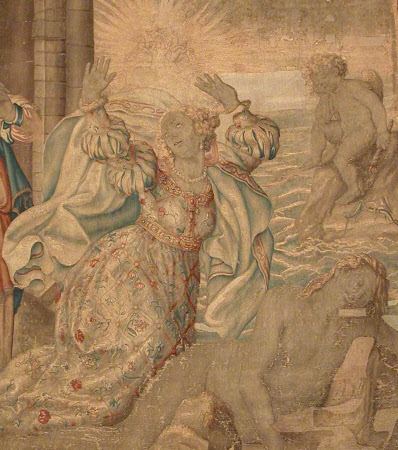 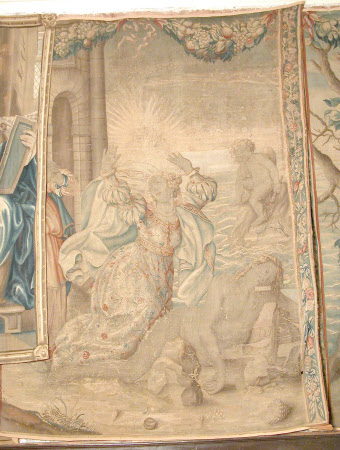 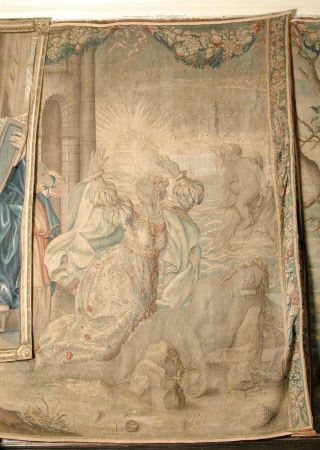 Tapestry, wool and silk, 7 warps per cm, The Death of Hero and Leander from a set of three of the Story of Hero and Leander, Mortlake, after a design by Francis Cleyn, c. 1660-1690. In the centre the naked figure of Leander lies dead, his body awkwardly propped up on rocks and his hair and body dripping with water. The distraught Hero, wearing a white dress embroidered with flowers, raises her arms in anguish and is about to collapse over her lover. To the left Hero’s maid wrings her hands and looks solemnly out at the viewer. On the far right Cupid sits on a rock overlooking the scene, his bow lying broken and his torch extinguished, resting his head on one hand in sad dejection at the demise of the lovers. The figures are on the rocky sea shore beside Hero’s tower, and behind them the stormy waters of the Hellespont stretch away. The narrow side borders are composed of leaves and flowers growing around a central stalk on a light blue ground and at the top swags of fruit and flowers hang from the upper edge of the tapestry, illusionistically extending over the picture plane. There is no lower border.

On right-hand galloon, near the bottom (folded under): A white shield with a red cross, signifying manufacture in England