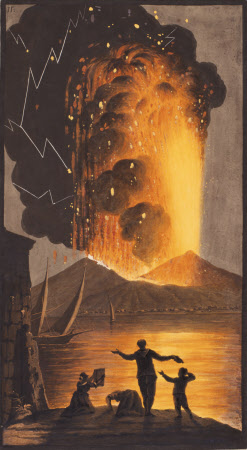 The sight of a live volcano would have most of us fleeing faster than you could shout ‘molten lava!’ but not so our 18th-century forebears. Campi Phlegraei or ‘Flaming Fields’ is a first-hand report of the spectacular eruptions of Mount Vesuvius written by Sir William Hamilton, the British envoy to the Neapolitan royal court and expert volcanologist. Today, he is perhaps better known as the much older husband of Lady Emma Hamilton during her scandalous love affair with Lord Nelson. As a diplomat, Hamilton entertained many visitors and frequently accompanied them on the perilous ascent of the live volcano without a hard hat or flame-proof jacket in sight. The area’s history of volcanic activity, including the recently excavated nearby classical sites of Pompeii and Herculaneum, made it a popular tourist destination for wealthy travellers making the Grand Tour. Hamilton’s text is a wonderful example of a beautifully illustrated treatise from the Age of Enlightenment - when science clearly came before health and safety.