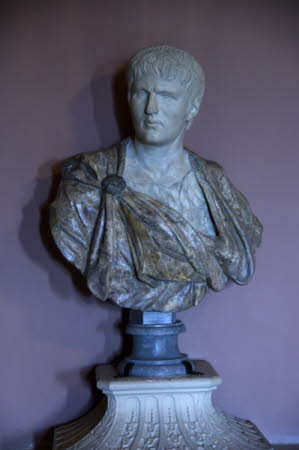 Carrara marble with onyx and yellow polychrome marble on a grey Bardiglio marble socle, An Unidentified Emperor (Called Emperor Galba, Emperor of Rome [3 BC - 69 AD]) (after the Antique), Italian, 17th century. A portrait bust described as the emperor Galba, after the antique, Italian, seventeenth century.

At Wimploe Hall at least by circa 1777, when the artist-clergyman the Reverend Thomas Kerrich made a brief list of pictures and sculpture in the house, noting ‘4 Antique Busts—one is Caracalla’ in the Gallery; introduced by Philip Yorke, 2nd Earl of Hardwicke, PC, MP, FRS (1720-1790) although they may equally have been acquired by Edward Harley, 2nd Earl of Oxford (1689-1741) who had a strong predilection for antiquities; by descent until sold with the house to Thomas Agar-Robartes, 6th Viscount Clifden, 1894; sold with the house to Captain and Mrs George Bambridge, 1938; sold from Wimpole around 1950; with Collins and Clarke, 81 Regent Street, Cambridge; purchased by Professor Sir Albert Richardson, probably on 25 February 1951; offered for sale at Christie's, King Street, London, 18 september 2013, lot 146 (together with a bust described as of the emperor Galba), remaining unsold; purchased by the National Trust by private treaty with the help of grants from the Art Fund, from a fund set up by the late the Hon. Simon Sainsbury, the Mr and Mrs Kenneth Levy bequest and other gifts and bequests, 2014.