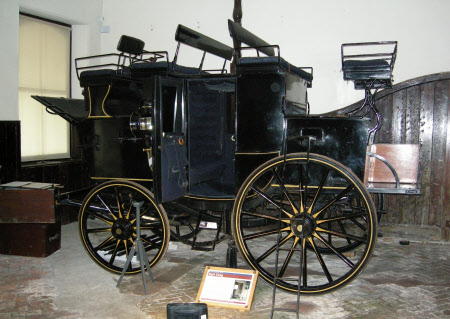 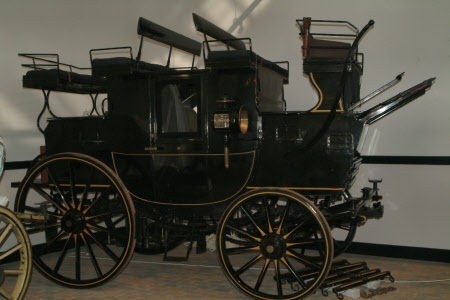 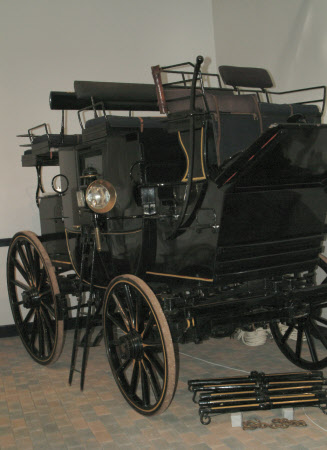 This coach is an elaborate and impressive carriage designed purely for a gentleman’s driving pleasure. It was ideally suited to entertaining guests at race meetings and other sporting events as the outside seats formed a private grandstand. Then having transported your guests to the meeting; a sumptuous cold picnic could be produced from the zinc- lined cool boxes in the hind boot.

Private Drag built circa 1890 by J.A. Lawton of Liverpool. Private Drag (four wheels) for a team of horses. This carriage has a centre pole and is sprung with telegraph springs, there are two candle lamps. Also on the carriage are a leather whip holder, a wicker umbrella basket, a folding step ladder and a rubber mat. The interior is in dark blue with six cushions. A heraldry crest is on both side panels. Painted In black livery with yellow lining.

Built in 1896 by J.A. Lawton and Co., Liverpool, this Private Drag can seat 12 on the roof – the owner who would drive, nine passengers and two grooms - and 4 inside. The name drag is a slang term for a gentleman’s private coach driven to 4 horses by the owner. Drags resemble stagecoaches and were used to attend meets of coaching clubs and for driving to sporting events, such as cricket matches or race meetings, where they made excellent grandstands. This coach has many of the fittings you would expect to find on a private coach, including a basket for umbrellas, a folding step ladder for access to the roof seats, zinc-lined mahogany boxes and a baize-lined drawer in the hind boot for the stowage of food, drink, cutlery, crockery and glasses. The boot door is hinged at the bottom edge so that it can be used as a serving table. Sir Dymoke White of Havant, Hampshire, the former owner of this fine coach, was a member of The Coaching Club from 1939 until his death in 1968 and was president from 1956 to 1968. During this period he attended nearly every meet of the club with his coach and was also one of the most successful competitors in coaching marathons at horse shows. He died shortly after the conclusion of a coaching marathon at the Aldershot Show in 1968. Arthur Showell, former head coachman at the Royal Mews, worked for Sir Dymoke for 9 years. He described them as the happiest years of his life. “He had a black Lawton coach which was the best one, used when we went to Ascot or anything like that. Race days we would get to Ascot at 12 o’clock. Sir Dymoke loved to drive up the High Street with all the traffic and hustle and bustle, and he would have George Abbott blowing the horn all the way!” At the last show they attended, Aldershot 1968, Sir Dymoke was driving with his sister beside him. Arthur recalls what happened - “We were trotting, and I was sitting at the back. The next thing I heard was Miss Pauline calling, “Arthur! Arthur!” and Sir Dymoke had fallen backwards; and do you know, those horses stopped quick as anything, although we were trotting!” A doctor was called and Sir Dymoke was taken to hospital, where he died. Arthur finishes this sad incident: “A chap came up and says to me, “If I were you I would load up and go home”, and that remark really brought me up short because nobody had told me what to do for nine and a half years. Sir Dymoke never told me what to do. He knew he never had to, we just talked roughly about what was going to happen.”