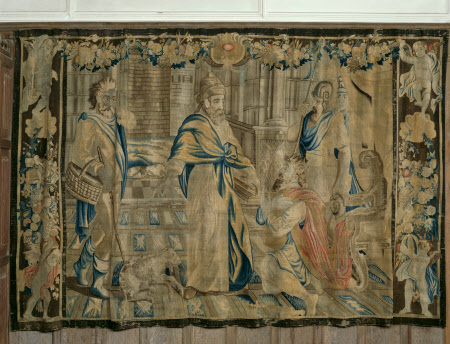 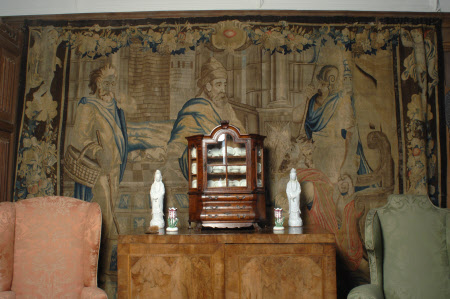 Tapestry, wool and silk, 6½ warps per cm, Nathan Reproving David, probably Pieter van Coppenolle, Oudenaaarde, c. 1665-1680. The prophet Nathan stands in the centre with King David kneeling before him, his cloak trailing over a throne. Nathan points to a lamb sitting on the ground at the feet of a man carrying a stick and a basket. To the right are two soldiers partly hidden by a curtain. In the side borders are playing putti with garlands of fruit and flowers and shell motifs. Swags of fruit hanging over the main field take the place of an upper border, and the tapestry is woven with no lower border. The signature 'P.V.C. AVD' appears on the lower galloon.

The subject of 'Nathan Reproving David' is taken from II Samuel 12. The prophet Nathan told King David a story about a rich man who took the only sheep of a poor man to feed a traveller, rather than kill one of his own flock. David was enraged by the story and vowed to punish the rich man, but Nathan then reminded him how he had stolen the wife of Uriah the Hittite. The tapestry is signed 'P.V.C. AVD', which probably stands for Pieter van Coppenolle, Audenarde (or Oudenaarde). The Coppenolle family were well known as tapestry producers in the city of Oudenaarde in the seventeenth century, however their family history is so complex that it is not known which Pieter van Coppenolle the signature 'P.V.C.' belongs to (de Meûter 1999, p. 199). The border designs with playing putti and swags of fruit also appear on tapestries signed by the contemporary Oudenaarde producer Abel van Regelbrugge. The designs are derived from borders used by Michiel Wauters (d. 1679), an Antwerp tapissier who exported large numbers of tapestries to England (de Meûter 1998, p. 107). A set of scenes from 'Roman History' in the University of Copenhagen has the same signature as 'Nathan Reproving David', and a series of the 'History of Joseph' at Falkland Palace, Fife, is stylistically similar and has the same borders, although it is not signed. No other 'David' tapestries by van Coppenolle are known. The posthumous inventory of Anna van Coppenolle, widow of Jan van Coppenolle, included a single 'David' tapestry (de Meûter et al., 1999, p. 312 n. 326). (Helen Wyld, 2012)

Bequeathed to the National Trust along with the house and contents by Sir Walter Jenner, 2nd Bt (1860 - 1948)