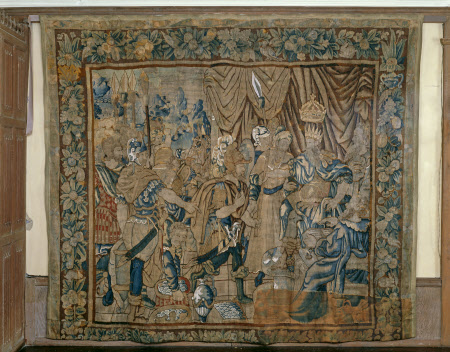 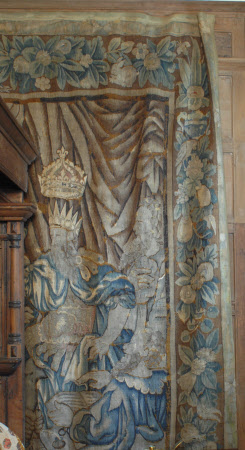 Hanging brightly decorated tapestries on the wall provided both colour and insulation against the cold.

Tapestry, wool and silk, 6½ warps per cm, King Cyrus, probably Aubusson, c. 1630-1650. A king, possibly King Cyrus, sits on a throne on the right holding a staff, and a soldier approaches holding its other end. Behind the soldier men bring chests full of money and lay them on the ground around the throne, and at the tope left people can be seen carrying sacks and vases. The King is surrounded by attendants including a man at the lower right who reads from a book. The borders are composed of bunches of fruit and leaves on a brown ground, with a narrow decorative band around the edge. The lower border has been removed and re-attached and part of it is now hidden, and at the lower right corner of the tapestry has been replaced with sections of painted canvas.

The subject of the tapestry is not certain but it may represent King Cyrus receiving the riches of his defeated enemy Croesus. Stylistically the tapestry can be attributed to the French workshops of the Marche region, either Aubusson or Felletin. Similar borders are found on tapestries from this region made in the late sixteenth and early seventeenth centuries (for example Chevalier, Chevalier and Bertrand 1988, p. 27). (Helen Wyld, 2012)

Bequeathed to the National Trust along with the house and contents by Sir Walter Jenner, 2nd Bt (1860 - 1948)