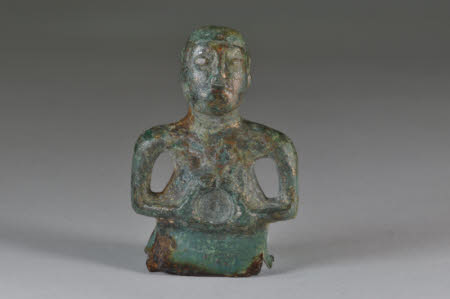 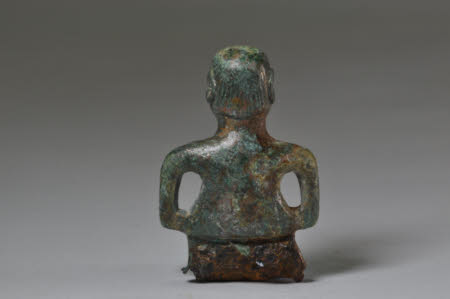 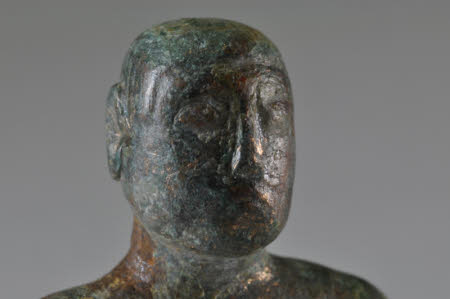 This small, metal figure appears to date from around the 1st century AD, and although initially identified as the rarely depicted god Cernunnos, he is now considered to be an unknown deity. While the features of the figure are stylistically Celtic, it is most likely to be a Roman artefact. His oval eyes, hairstyle and moustache are clearly discernible, and he is shown holding an open-ended metal neck ring, known as a torc, with a small central indentation that may have once held a decorative inlay. The figure probably originally served as the handle of a spatula, perhaps used to mix medicines, or wax to make writing tablets. It has been cast in a copper alloy and was found on the Wimpole estate in Cambridgeshire in 2018. It may have been lost or deposited here by inhabitants of early Roman Britain at the end of the Iron Age. It is a reminder of the ways in which the Celtic religion shared features with the Roman religion during the Roman occupation of Britain from AD43 to 410, when both worshipped multiple deities responsible for different aspects of daily life.

An early Roman handle adornment, 1 AD – AD100, copper alloy, depicting an unknown Celtic deity, holding a torc. From a spatula for mixing and applying medical salves, or for cutting blocks of wax to spread on writing tablets. Cast in a mould and then finished by hand. Its base is a split socket that retains traces of iron corrosion from the spatula blade. Discovered in an early Roman context during an excavation on the Wimpole Estate in 2018.

This small copper alloy figure was discovered in an early Roman context on the Wimpole estate in Cambridgeshire and may have been lost or deposited by inhabitants of early Roman Britain in the 1st century AD. Although it is believed to be of Roman manufacture, the torc (open-ended metal neck ring) the figure holds is indicative of Celtic symbolism and the oval eyes are typical of Celtic anthropomorphic depictions. A small recess at the centre of the torc is suggestive of a decorative inlay, now lost. Conservation work has revealed a neatly shaped hairstyle, with long hair on the back of the head and a distinctive moustache. This evokes the description given by Julius Caesar, who claimed many Britons were clean-shaven except for their heads and the hair on their upper lip. Whether the figure’s hairstyle is typical of contemporary styles will never be known for certain, but the fact the figure holds a torc - associated with status - and formed part of the handle of a spatula - either used to mix medicines, or wax for writing tablets – is suggestive of influence and power. As there are no known direct parallels found in Celtic or Romanised-Celtic iconography, it is unclear whether this figurine represents a manifestation of a particular Celtic deity or whether it was designed to embody ‘Celtic man’. Anthropomorphic handles and figurines are relatively rare outside temple and shrine contexts. This makes the object a nationally significant find, which gives fascinating insight into the aesthetics and symbolism of the period.