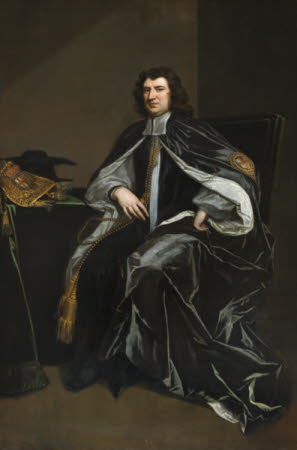 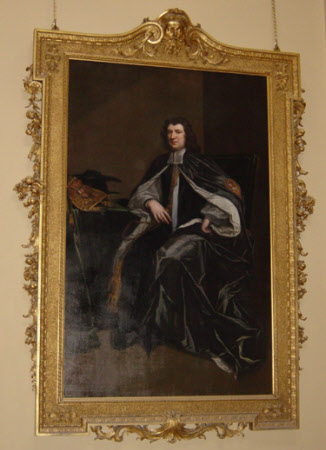 Gilbert Burnet, born in Edinburgh, educated at Aberdeen College, became Professor of Divinity at Glasgow when only 26. He was an outspoken cleric who made himself unpopular with Charles II, and was outlawed by James II. He played a prominent role in the Revolution of 1688, coming over with William III, who appointed him Bishop of Salisbury the following year. His ‘History of His Own Time’ was annotated by the 2nd Earl of Hardwicke. He also wrote a History of the Reformation in England, and an account of his conversion of the reprobate Earl of Rochester. He is here shown wearing the robes of the Chancellor of the Order of the Garter.

Oil painting on canvas, Gilbert Burnet (1643–1715), Bishop of Salisbury by Sir Godfrey Kneller (Lübeck 1646/9 - London 1723), signed lower right: G Kneller f./1693. This is the one picture to have remained at Wimpole since the time of the Hardwickes, and was probably acquired by the 2nd Earl because of his great admiration for the sitter, who was, by contrast, anathema to the Harleys. Gilbert Burnet played a prominent role in the Glorious Revolution of 1688, and was appointed Bishop of Salisbury in 1689. He thus became ex officio Chancellor of the Order of the Garter, in whose robes he is shown. The superb Palladian frame may have been carved by Matthias Lock (fl. 1710-65)

Jamers Johnston ( 1655 - 1737), the sitter's cousin; Earls of Hardwick; Viscounts Clifden; bought with the house by Captain and Mrs Bambridge; bequeathed by Elsie Kipling, Mrs George Bambridge (1896 - 1976), daughter of Rudyard Kipling, to the National Trust together with Wimpole Hall, all its contents and an estate of 3,000 acres