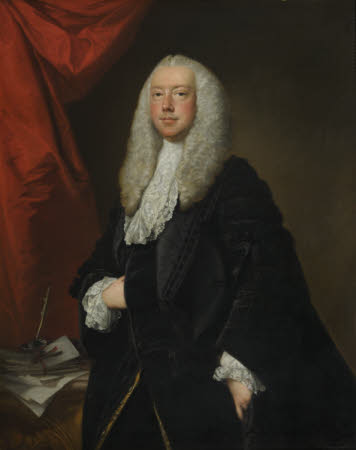 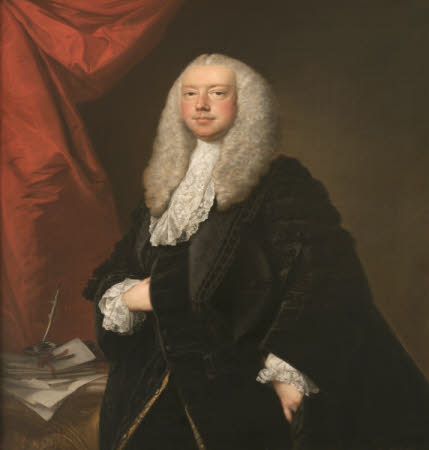 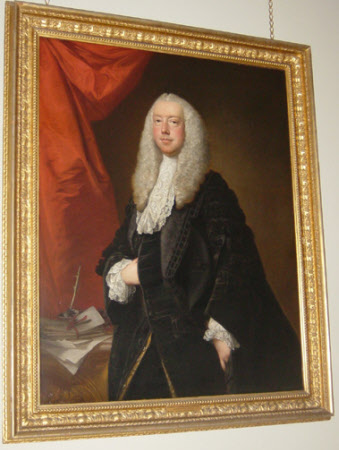 The sitter held various official posts, including MP for Reigate 1747-68, and for Cambridge University 1768-1770. He was also Solicitor-General (1756-61) and Attorney-General (1762-3 & 1765-6), but died three days after being appointed Chancellor in 1770. The cause of his death (though suicide was rumoured, and stated as a fact by Horace Walpole, who loathed all the Yorkes) was essentially gluttony and ill-health, but it may also have been brought on by his agonies of indecision over accepting from the King an office that he had schemed to follow his father in all his life, but which involved abandoning his Rockingham Whig allies to do so. This picture was traditionally attributed to Ramsay, but it now seems more plausible that it was Hudson who painted this portrait. The sitter’s wife was painted by Hudson, in what now forms its pendant (although they were not necessarily conceived as such).

Oil painting on canvas, The Right Hon. Charles Yorke (1722-1770) by Thomas Hudson (Devonshire 1701 – Twickenham 1779), circa 1756. An almost three-quarter length portrait, second son of the 1st Earl of Hardwicke, married first (1755) to Catherine Freman, and secondly (1762) to Agneta Johnston. Appointed Solicitor-General in 1756, Attorney-General in 1765, and Lord Chancellor, like his father before him, in 1770, but died on the day after his acceptance of the appointment. Although bought by Mrs Bambridge with the portrait of Yorke's wife, it is far from certain that they are pendants. This picture was probably painted to celebrate the sitter's appointment as Solicitor-General in 1756. Frame inscription has wrong attribution to Allan Ramsay.

Bought at the 9th Earl of Hardwicke's sale at Christie's, 7 July 1967, lot 97; bequeathed by Elsie Kipling, Mrs George Bambridge (1896 - 1976), daughter of Rudyard Kipling, to the National Trust together with Wimpole Hall, all its contents and an estate of 3,000 acres