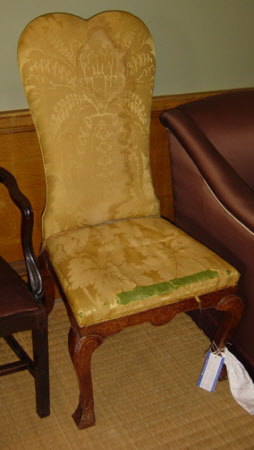 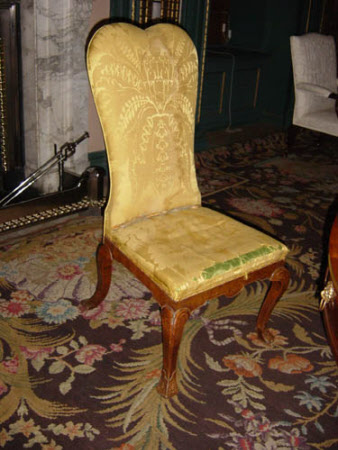 A pair of walnut and inlaid chairs, English, circa 1720 - 1730, attributed by some to the workshop of Thomas Roberts (1686 - 1714) and his son Richard Roberts (d. 1733). Upholstered in modern yellow foliate silk damask. The high and waisted back with heart-shaped top. The drop-in chassis seat set into seat rails with shaped spandrels; the front seat rail with pendant central lunette. Raised on angular cabriole front legs and sharply raked rear legs, both terminating in square pad feet. Inlaid to the seat rails and legs with arabesques and foliage. -- This extremely rare and stylish pair of chairs are some of the few pieces of furniture which were at Wimpole in the 18th century and, although having been elsewhere in the intervening years, have recently been returned to the house. They were probably made for the house at the same time as alterations were being made to it by James Gibbs in the 1720s.

Almost certainly made for Edward Harley, 2nd Earl of Oxford (1689 - 1741) and associated with alterations made to Wimpole in the 1720s. Listed in the Inventory taken at Wimpole in 1835 in the Entrance Hall as '8 High back Walnut tree Chairs inlaid Buhl Stuff'd backed Seats Cover'd Crimson Silk Damask & finished brass nails'. Thence by descent with the property until it was sold in 1894 to Thomas, 2nd Baron Robartes and 6th Viscount Clifden (d.1930) and his son the 2nd Viscount (d.1966), by either of whom removed to Lanhydrock, Cornwall. Some of the chairs were purchased by Colonel Norman Colville, M.C. (1893 - 1974) and two pairs were sold at Christie's in June 2001 (Lots 60 and 61). This pair from the estate of Diana Colville (1924 - 2000), Penheale Manor, Cornwall. Accepted in lieu in 2002 and transferred to National Trust in 2003.