Survey drawing of the south front, or entrance, façade of Wimpole Hall, Cambridgeshire 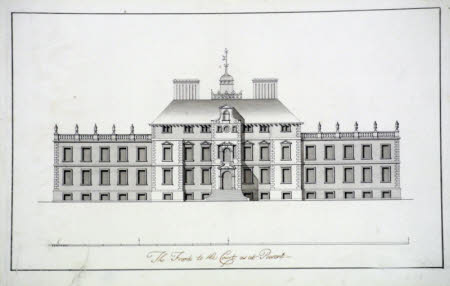 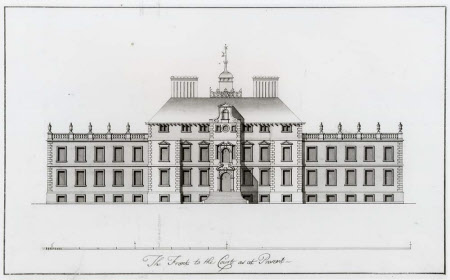 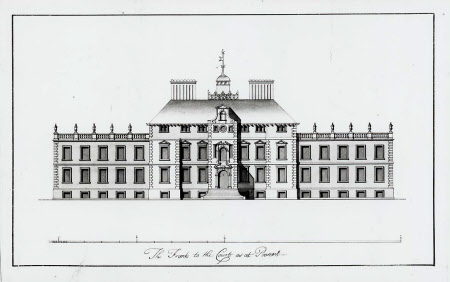 The five-bay wings that flank the central block in this drawing are James Gibbs's additions of the 1720s. Purposefully plain, they defer to the earlier house and reflect its proportions and detailing. The wings are both of two storeys on a basement plinth, with a regularised pattern of fenestration and have roof-top balustrades ornamented with urns. The real interest of this survey drawing, however, is that the seven-bay house shown at its centre is the only visual record to have survived of the 'extraordinary curious neat house' that John Layer had described Sir Thomas Chicheley as building in c.1640, almost exactly a century earlier. To the modern eye, the central 'tower' and the lower projections at either end of the house give the elevation an antiquated appearance, distantly echoing similar features in Jacobean country house architecture, indeed Jeremiah Milles visiting sometime between 1735 and 1740 noted of it: 'The house does not appear to be very modern on ye outside'. Yet Chicheley's Wimpole, while lacking the sophisticated badge of an applied temple front or classical orders, and perhaps unfashionable by the time the cloud of the interregnum had passed, is deserving of closer analysis. The architectural components of the central tower in particular might lead one to suppose that Chicheley's house was a curious, transitional hybrid that fits happily into the stylistic pigeon-hole of 'Artisan Mannerism', devised by Sir John Summerson and alternatively named 'Subordinate' by John Harris. The broken pediments of its entrance doorway and first floor window (triangular above segmental), together with the shaped gable at eaves level, might be said to typify the Netherlandish-inspired mannerism which it has been argued was favoured by London craftsmen and merchants in the early seventeenth century. Chicheley was of course a merchant and a leading light of the Grocers' Company. Strikingly similar to the crowning element in the exuberant entrance facade of Swakeleys, Middlesex (1638), Chicheley's gable does, at least, appear to conform to the 'Amsterdam gable' type identified by H.J. Louw in which 'a classical aedicule is flanked by two large scrolls' and 'subdivided into various separate units by means of vertical and horizontal elements'. But an alternative thesis suggests that Chicheley's house bears the hallmarks of Jonesian and more direct Italian influence. Giles Worsley has made a case for the emergence in the 1630s of another strain of English Classicism - Serlian rather than Palladian - under the influence, and in some cases direct guidance, of Inigo Jones (1573-1652). In his mature, and particularly domestic, work Jones augmented his knowledge of Palladian and Scamozzian architecture with a study of the designs of Sebastiano Serlio (1475-1554). Serlio's seven volumes of L'Architettura (the last, and in this context most important, of which was published posthumously) were of immense influence in northern Europe and for Jones, and particularly his Netherlandish contemporaries, they offered models for handsome but not overly grand, astylar houses (appropriate for use beyond courtly circles), and a particularly rich repertory of door and window types. Worsley counts among the defining characteristics of this new style compact, three-storey country houses on raised basements, of double-pile plan, with hipped roofs supported by modillion brackets; windows placed on a regular grid and pedimented on the ‘piano nobile’ and supplemented by Serliana and ‘oeil-de-boeuf’ windows; and ground and first floors of equal height separated by plat bands. Every one of these elements is present in the south facade of Chicheley's house. The central first-floor window with broken pediment has narrow slip windows to either side, and while not a conventional Venetian window in the Burlingtonian manner, it is nonetheless a tripartite Serliana. The bull's-eye window at the attic level, beneath the shaped gable and sandwiched between a pair of small rectangular windows, has echoes of Nicholas Stone's remodelled north front of Kirby Hall, Northamptonshire (1638-40) and, at a pinch, might be seen as a paraphrase of the upper register of Jones's design for the west front of St Paul's Cathedral (c.1633--4). Desirous of seeing classical architecture flourish in Britain, Jones provided guidance both to Nicholas Stone (1587-1647) and to Isaac de Caus in their respective rebuilding of Goldsmiths' Hall, London (1635-8) and the south front of Wilton House, Wiltshire (c.1636). Following the Civil War, he gave further advice at Wilton, to his protege John Webb, and possibly to Sir Roger Pratt at Coleshill. Worsley further speculates whether Peter Mills (c.1600-70) might have benefited from Jones's help in the early stages of planning at Thorpe Hall, Cambridgeshire (1654) before Jones's death in 1652. Why might not Chicheley, whom it has been suggested may have been his own architect, have similarly benefited from Jones's advice, or at least been influenced by the clutch of Jonesian astylar houses that were built in the 1630s? Peter Mills has also been suggested as a possible guiding hand, but might Nicholas Stone (for stylistic and political reasons) be a more likely possibility? Compounding on the Oxford Articles, it was into Goldsmiths' Hall that Chicheley paid his fines. Catalogue entry adapted from David Adshead, Wimpole Architectural drawings and topographical views, The National Trust, 2007

Below scale: The Front to the Court as at Present