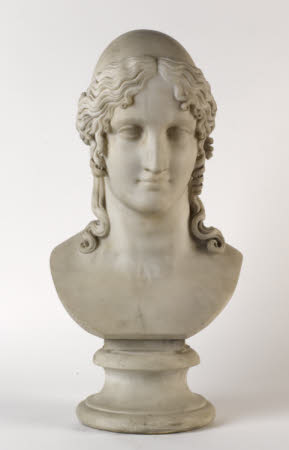 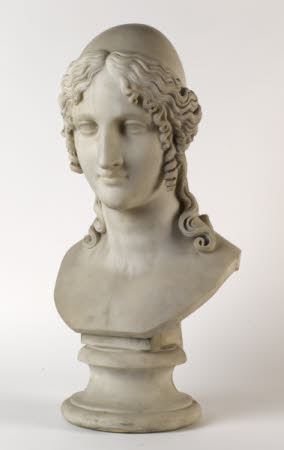 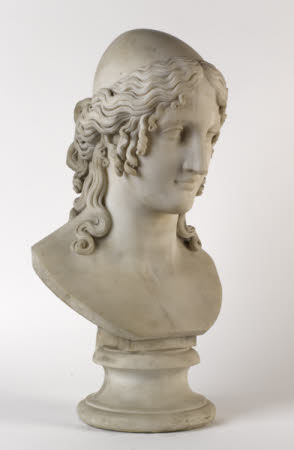 Marble, Helen of Troy, Antonio Canova (Possagno 1757 - Venice 1822), 1816. A marble bust mounted on turned marble socle of Helen of Troy wearing a cap in the form of an egg, as in Greek mythology she was one of the sets of twins born of Leda and Zeus. Zeus came to Leda in the form of a swan; from the eggs produced from by this alliance emerged two sets of twins: Clytemnestra and Helen, and Castor and Pollux. Inscribed on truncation on reverse: 'VICECOMITI CASTELREGHIO | VIRO PRESTANTISSIMO | ANTONIVS CANOVA | FECIT. AC.D.D.' [‘To Viscount Castlereagh | a most prominent man | Antonio Canova | made it. Year of Creation of the Lord God’].

The marble bust of Helen of Troy by Antonio Canova was sent as a ‘thank you’ gift to Robert Stewart, Viscount Castlereagh (1769-1822) for his help in persuading the British government to return Vatican works of art pilfered by Napoleon Bonaparte and sent to Paris for display in the Louvre. Canova, the most celebrated sculptor of his day, was asked by Pope Pius VII to represent the Holy See in a diplomatic mission to repatriate the spoils of Napoleon's campaigns. The British government was ready to help, even providing a frigate to ship the art back to Rome, whilst a number of individuals helped and were rewarded with busts by Canova, depicting visions of ideal female beauty. Thus the Duke of Wellington, victor at Waterloo, received the Head of a Dancer, now in the Wellington Collection, Apsley House, and William Hamilton the exquisite ideal head now in the Ashmolean Museum, Oxford. But it was the Irish Viscount who was thought to have done best out of the deal with Helen – appropriate in the mythical subject of the sculpture was herself a beautiful thing, stolen by foreigners and eventually, after years of war, returned home. Lord Castlereagh's Helen is one five known versions of a bust given by Canova to the Contessa Isabella Teotochi Albrizzi (1760-1836) in 1811. The sculptor was a regular guest at salons hosted by the Contessa at the Palazzo Albrizzi, Venice. That bust was also seen by Lord Byron, a salon member, who was so moved by its beauty that he wrote the 1816 epigram On the Bust of Helen by Canova. Other versions include an 1817/18 bust made for the Marchesa di Groslier and an 1819 version which is now in the Hermitage Museum, St Petersburg. Four gesso or plaster casts are at the Museo Canova, Possagno, one of which has points for casting and two of which are colossal. Upon seeing Viscount Castlereagh's Helen, the celebrated portrait painter Thomas Lawrence wrote to Canova: 'you have sent a Helen...that even Lady Castlereagh will not permit His Royal Highness [the Prince Regent] to have, and which I think is your most beautiful head...' (Lawrence quoted in Williams 1831, pp.352-3). Jeremy Warren and Alice Rylance-Watson January 2018