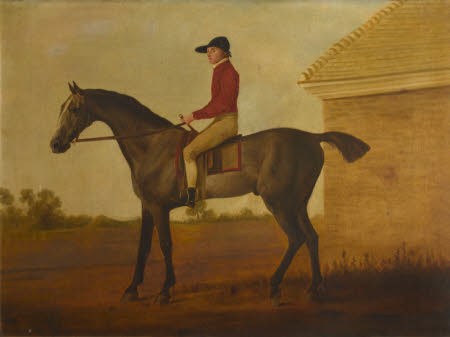 Oil painting on canvas, Gimcrack by John Best (fl. London 1750 - 1801). Gimcrack, foaled in 1760 by Cripple, the Godolphin Arabian's son, one of a Partner mare, was one of the best-known 18th-century racehorses. His greatest victory was in 1765, when he raced against Sir James Lowther's Ascham in a 1,000 guineas match at Newmarket. Betting is said to have exceeded £100,000 and Gimrack's owner, the 2nd Viscount Bolingbroke, commissioned Stubbs to portray Gimcrack winnning the race. Gimcrack was later sold to Lord Grosvenor, for whom he won the Newmarket in 1770.

Ascott, Buckinghamshire, Scala, 2008 by John Martin Robinson and others [pictures entries by Karin Wolfe on basis of Gore entries, 1963 with contributions from Alastair Laing] , no. 45