The Head of Saint Apollonia 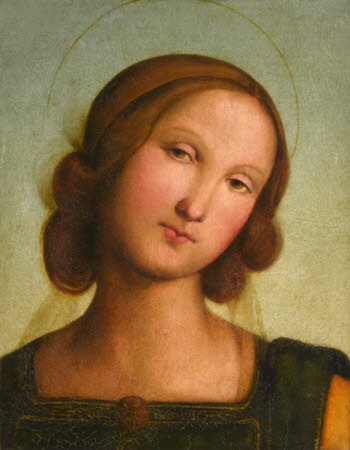 Oil painting on canvas, The Head of Saint Apollonia, manner of Perugino (Citta della Pieve c.1450 – Fontignano 1523). A young girl facing the spectator, her head inclined to the right. The head of Saint Apollonia derives from Perugino's 'Virgin and Child with Saints Michael the Archangel, Catherine of Alexandria, Apollonia and John the Baptist in the Pinacoteca Nazionale, Bologna. The altarpiece, which is signed, came originally from the Capella Scarani in San Giovanni in Monte in Bologna and was painted in around 1497.

Ascott, Buckinghamshire, Scala, 2008 by John Martin Robinson and others [pictures entries by Karin Wolfe on basis of Gore entries, 1963 with contributions from Alastair Laing] , no. 132