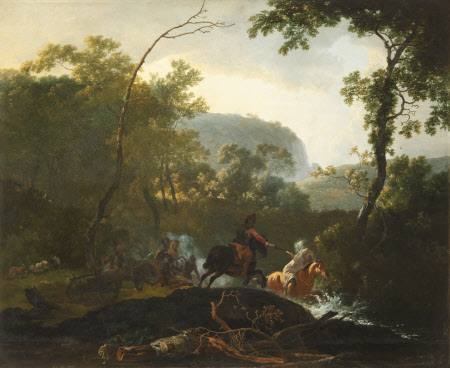 Oil painting on panel, Soldiers attacking a Convoy, circle of Dirk Maes (Haarlem 1659 - Haarlem 1717), previously attributed to Jan Asselyn (Dieppe c.1610 - Amsterdam 1652). A carriage has been overturned and plundered by robbers on a track emerging form a wood - ?or attacked by soldiers; an escaping horseman in a white nightshirt is shot at by a mounted soldier as he gallops through a stream.

Verso: Pynacker in inscribed on reverse

Ascott, Buckinghamshire, Scala, 2008 by John Martin Robinson and others [pictures entries by Karin Wolfe on basis of Gore entries, 1963 with contributions from Alastair Laing] , no. 62