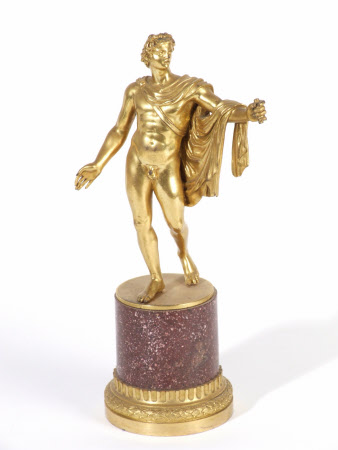 Gilt bronze on porphry base and ormolu collars

Gilt bronze on porphry base and ormolu collars, Apollo Belvedere, French School, 17th century. One of a pair of 17th century figurines of Bacchus, nude and holding a bunch of grapes, and Apollo, semi-nude with a cloak over his shoulders and raised left hand, the latter of which is after the antique. Regarded as the model of masculine grace in the 18th-century, excavated in Rome in the 15th century and first recorded in the garden of Cardinal Giuliano della Rovere, who, as Pope Julius II, had transferred it to the Vatican by 1509, and by 1511 to the Belvedere there, whence its name. With one interruption, when it was seized by the French, from 1797 to 1815, it has been in the Belvedere courtyard of the Vatican museum ever since. Mounted on Louis XVI cylindrical socles, the bases with chased ormolu collars cast with demi-flutes and berried wreaths.