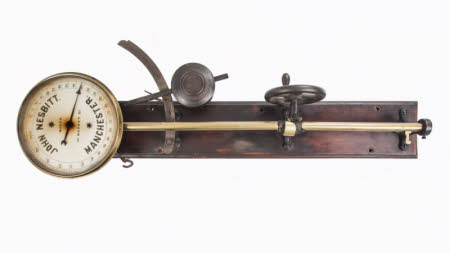 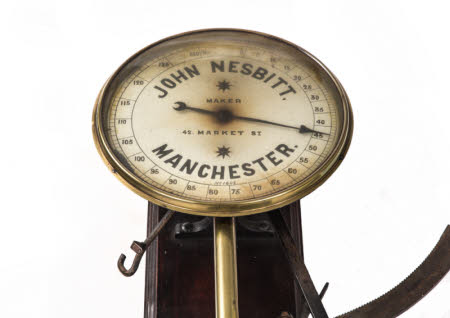 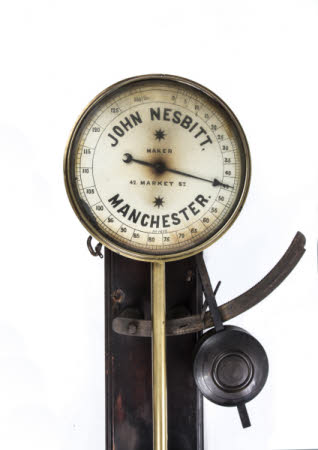 Yarn strength tester made by 'John Nesbitt / Maker / Market St / Manchester / No.1602'. There is a wooden back plate to allow it to be fixed to the wall. To test for strength, threads had to be carefully and accurately reeled out by using a wrap wheel. If threads were twisted together, the strength would appear greater than it should. Approximate breaking strengths were used as a guide, and if there was a pronounced lower break, yarn would require examination to trace the cause. The instrument used in the tensile strength determination was of a dead-weight type, the recording arm resting upon knife edges and a uniform stress applied by water pressure. The rate of speed was constant and the instrument was carefully calibrated. The Nesbitt Cloth Strength Tester was hand operated and had a high-test limit of 500 pounds. Samples of either 6.5 by 9 inches or 4 by 9 inches were generally tested for strength. Larger samples required heavier and stronger machines such as these and therefore it is likely Quarry Bank used the larger sample size in testing. The length, 9 inches, represented the amount of cloth actually undergoing the whole of the strain between the machine jaws, and therefore samples for testing were cut longer to provide for adequate grip throughout the pull. The test piece would also be cut wider than the jaws due to the difficulty of cutting exactly parallel with the threads, which could cause weakening of the actual test width. The machine tested cloth at either 250 or 500 pounds. Cloth samples were inserted between the clamps and weight applied using the hand wheel. Strength was determined by the weight required to break the cloth, as indicated on the gauge. For cloths with lesser strength than 250 pounds, a light and less powerfully built machine of the vertical dead-weight type was necessary, which offered the most extreme accuracy and were also comparatively low cost and smaller than machines such as this one. After World War One, an ever increasing demand for compact and self-contained Electric Yarn Testers may have seen machines such as this go out of use. The new machines were faster and more accurate than the hand driven strength testers. John Nesbitt was located at 42 Market Street, Manchester. The workshop manufactured instruments for the textile industry such as weighting scales, yarn balances, wrap reels. In 1913, John Nesbitt took over scale makers H. Sutcliffe & Co, which was also located in Manchester.