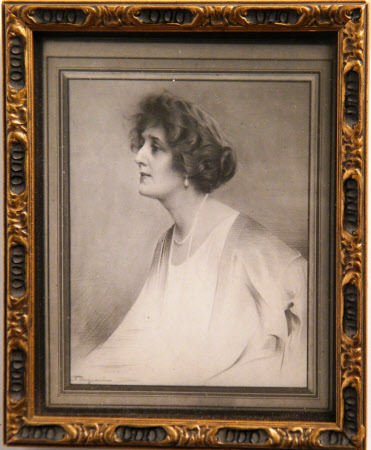 [Saved] Photograph of a painting of the Hon. Rachel de Montmorency (1891-1961), in a gilt frame. The artist and whereabouts of the painting are unknown. de Montmorency, maiden name Tancock, was a glass painter who worked as a nurse in the Voluntary Aid Detachment during the First world war, potentially at Clandon Park with Violet, Countess of Onslow. Tancock's name is not present in the Clandon Park Hospital 1914-1919 [NT 1441319], but this should not be interpreted that she was not involved as there is no other obvious reason for her portrait being in the Onslow collection. Tancock married Miles Fletcher de Montmorency in 1931, who was also an artist.