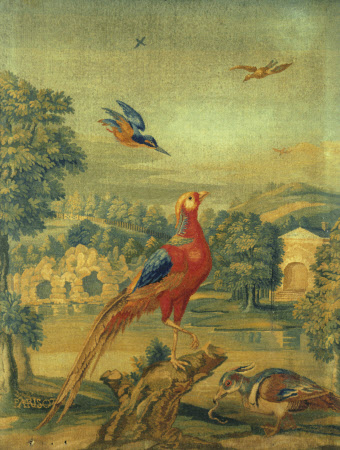 Joining Clandon’s collection from the bequest of Hannah Gubbay, a rare textile panel produced by the fine knotting of the threads, as if for a carpet. Opening a short-lived textile manufactory in Fulham (1753-55), Pierre Parisot adopted both the techniques and skilled émigré weavers from the Savonnerie carpet factory outside Paris. As his forbearer, his production focused on deep-pile woollen textiles of the highest quality for aristocracy and royalty. This example shows the 18th-century landscape gardens at the National Trust’s nearby Claremont Gardens, in Esher, formerly owned by the 1st Duke of Newcastle, along with the 18th-century Palladian-style Claremont House and a variety of specimen wildfowl.

Louis XIV Savonnerie picture signed Parisot showing a Chinese pheasant in brilliant blue and red plumage perched on a trunk, a mandarin duck at one side and a river across which is seen rocks and a house (Claremont).