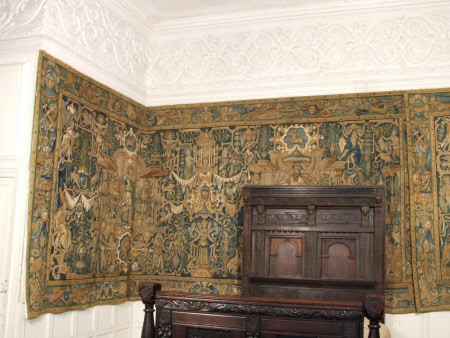 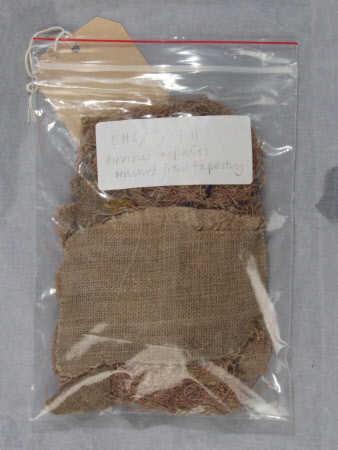 Tapestry, wool and silk, 4 warps per cm, Saturn and Jupiter from a set of Planetary Gods, Oudenaarde, c. 1570-1590. The main field of the tapestry is filled with grotesque decoration surrounding two central cartouches with figures of the gods Saturn and Jupiter. Saturn is shown devouring one of his children and holding a scythe, and Jupiter is crowned and carries a sceptre and a triple thunderbolt. Above and below the figure of Saturn are smaller cartouches with a goat and a man pouring water, representing the star signs Capricorn and Aquarius, while above and below Jupiter are a centaur drawing a bow and a fish, representing the star signs Sagittarius and Pisces. The surrounding grotesque decoration includes small figures of fauns, wrestlers holding snakes, sorceresses, exotic birds, goats, dragons, and a fair surrounded by serpents and fishes (in the centre), all arranged among strap work and flowers. The borders of the tapestry are filled with military trophies, weapons and armour. A section of unrelated verdure tapestry has been used as a patch in the lower right hand corner.