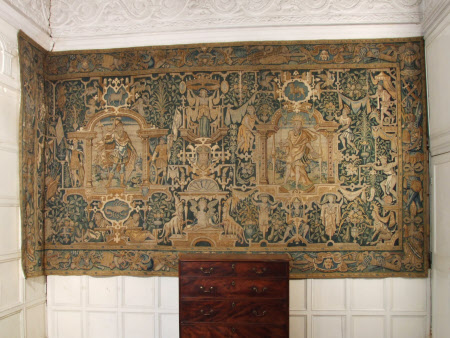 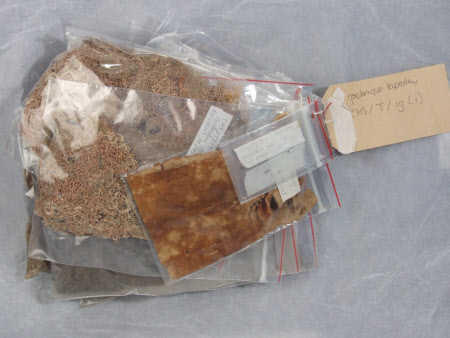 Tapestry, wool and silk, 4 warps per cm, Mars and Sol from a set of Planetary Gods, Oudenaarde, c. 1570-1590. The main field of the tapestry is filled with grotesque decoration surrounding two central cartouches with figures of the gods Mars and Sol (Apollo). Mars wears armour and carries a shield and a pike, and Sol carries a book and a sceptre, wears a crown and has a sunburst around his head. Above and below the figure of Mars are cartouches with a ram and a scorpion, representing the star signs Aries and Scorpio, while above the figure of Sol is a lion representing the star sign Leo. The surrounding grotesque decoration includes small figures, sea monsters, exotic birds, dog-like creatures with human heads wearing jesters' hats, and a sphinx (in the centre), all arranged among strap work and flowers. The borders of the tapestry are filled with military trophies, weapons and armour. The lower border has at some point been cut off and re-attached.