The Holy Family with Saint John the Baptist 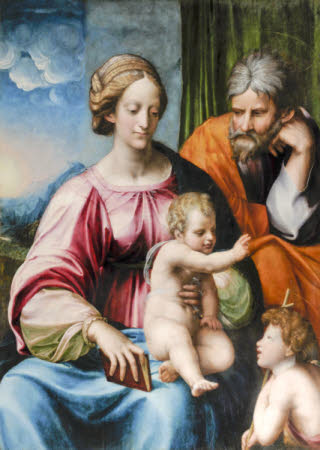 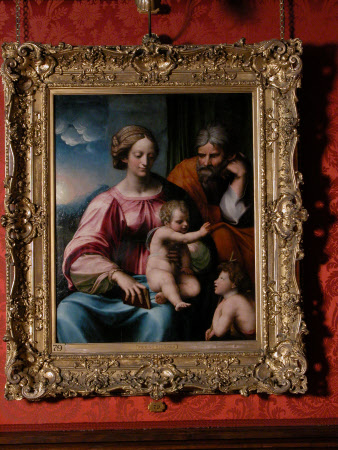 Oil painting on panel, The Holy Family with Saint John the Baptist, attributed to Pierino del Vaga (Florence 1501 – Rome 1547), circa 1527. St Joseph looks over the Virgin's shoulder on right, infant St John lower right. Perino del Vaga was in Raphael's workshop at Rome. The picture was a great favourite of Lord Penrhyn's son, the 2nd Lord Penrhyn, because the Virgin reminded him of his first wife, Pamela Blanche Rushout (d.1869). Accordingly, when the pictures were rehung in 1901, this painting was transferred from over the large Dining Room fireplace to Lord Penrhyn's sitting-room in the Keep. Perino del Vaga was a member of Raphael's workshop in Rome where he worked until the Sack of Rome in 1527. If this picture is by del Vaga, it would have been painted prior to his departure for Genoa.

Purchased by Colonel the Hon. Edward Douglas-Pennant, 1st Baron Penrhyn of Llandegai (1800 – 1886); thence by descent; accepted by HM Government in lieu of Inheritance Tax and allocated to the National Trust in 2017