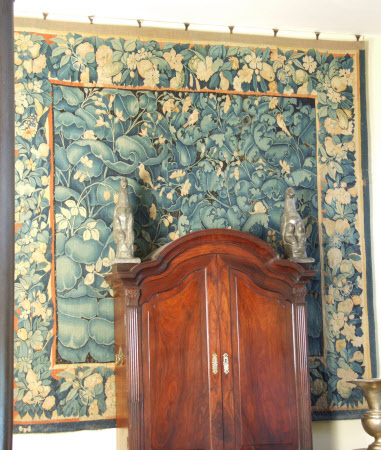 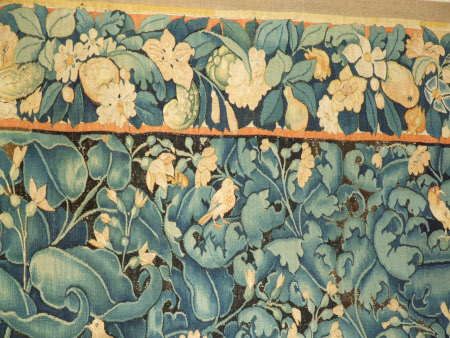 Tapestry, wool and silk, 4-5 warps per cm, Large Leaf Verdure, Oudenaarde, c. 1530-1550. The main field of the tapestry is entirely filled with giant leaves. The leaves seem to belong to two different plants: on the left the leaves have smooth edges, and on the right they have scalloped edges. Small flowers and leaves entwine around the leaves, including a strawberry plant on the left. Birds are perched amongst the leaves, as well as two snails. Where it is visible, the ground beneath the leaves is dark brown. There is a border on all four sides with a band of bunched leaves, fruit and flowers with an orange and yellow background. A dark blue galloon runs around the outside of the border and there is a mark in the form of a pair of spectacles over a small shield on the galloon at the lower left. The tapestry may have had areas restored during the last century, for example in the orange ground to the borders.

Tapestries like this one with a field completely filled with huge leaves are usually described as a ‘Large Leaf’ or ‘Giant Leaf’ tapestries for obvious reasons. This style of verdure emerged in c. 1510-20, and can be seen as a development from the so-called ‘millefleurs’ tapestries decorated with thousands of tiny flowers that were popular earlier on. The new genre of verdure has been linked to a growing interest in the natural world and in botany, spurred in part by discoveries in the New World in the sixteenth century, and the exotic plants and animals to be seen there (Wingfield Digby and Hefford 1980, pp. 54-55; Cavallo 1993, pp. 586-93; 600-07). The designs of such tapestries are not purely scientific or representational however. Attempts to identify the specific plants depicted in the large leaf verdures have usually been tentative – the leaves themselves appear to be fantastical, only loosely based on real plants. Often the smaller plants that wind between them are easier to identify, as in the tapestry at Owletts where there is a strawberry plant. The birds and snails at Owletts are also common features of such verdures. As the large leaf tapestries rarely include signs of human life they have also been linked to depictions of Paradise or the Garden of Eden. They were sometimes referred to in these terms in sixteenth-century inventories (Brosens 2010, p. 220). The way the leaves completely fill the foreground field, and close of any sense of space and perspective, creates a sense of being lost in the wilderness. When displayed as a ‘chamber’ completely covering the walls of a room, these tapestries would have created the illusion of being in the middle of a forest. The large leaf tapestries were produced predominantly in the Southern Netherlands, however it is often difficult to attribute them to a particular weaving centre as few of them bear makers’ marks. The tapestry at Owletts is of particular importance because it bears a version of the mark of the city of Oudenaarde on its lower galloon. This mark usually takes the form of a pair of spectacles over a white shield with two red bands. Although the shield at Owletts appears to be plain red, there is little doubt that it refers to the city of Oudenaarde. There is a large leaf verdure of comparable scale and design in the National Trust’s collection at Hardwick Hall (no. 1129548). A further set at Hardwick is more refined and larger in scale (no. 1129595). There are examples of large leaf verdures with animals and balustrades at Lyme Park (nos. 500306, 500372) and Dorneywood (no. 1508085). A related genre, with large flowers and plants all over a plain ground, is represented by a tapestry at Cotehele that also includes some heraldic elements (no. 348313). A tapestry with giant leaves and animals at Montacute (no. 598127) is slightly different in style was probably made in the central French region of La Marche. (Helen Wyld, 2012)

Left end of lower galloon: the mark of the city of Oudenaarde: a pair of spectacles over a red shield