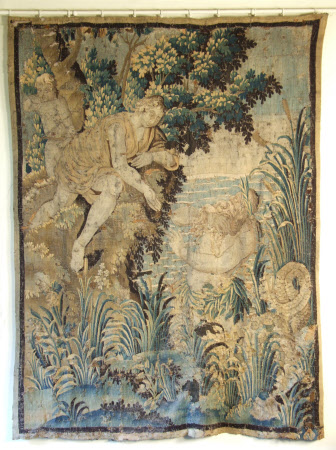 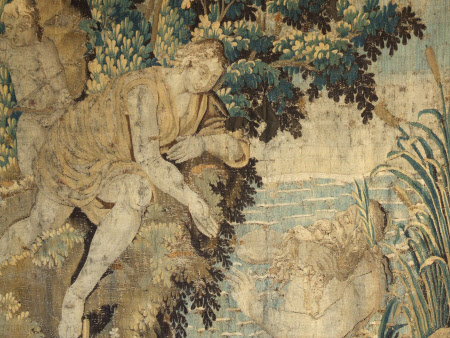 Tapestry, wool and silk, Glaucus and Scylla, Faubourg Saint-Marcel Workshop, Paris, after a design by Laurent de la Hyre, c. 1650-1670. The nymph Scylla sits on an overhanging rock to the left, leaning down and gesturing to Glaucus, a monster with a man's upper body and the tail of a fish, who looks up at her from the water below. Glaucus is surrounded by reeds and wears a crown of reeds on his head, and behind him the water stretches away into the distance. The boy Cupid stands behind Scylla looking mischievous, and behind is a backdrop of trees. The tapestry has a dark brown and beige edging around all four sides, possibly the inner edge of a now lost border. A small floral fragment, possibly part of such a border, is attached at the lower right corner.

The story of Glaucus and Scylla is told in Ovid's 'Metamorphoses'. Glaucus was a fisherman from Boeotia who ate a magical herb that made him immortal. He was transformed into a sea-god, and fell in love with the nymph Scylla, but she rejected his advances finding his fish-tail and bluey-green appearance unattractive. The tapestry comes from a series of 'Mythological Subjects' from the Metamorphoses, designed by Laurent de la Hyre (1606-1656). La Hyre's original painting of 'Glaucus and Scylla' of c. 1640-45 is in the J Paul Getty Museum, Los Angeles. The 'Metamorphoses' tapestries were woven in the Faubourg Saint-Marcel workshop in Paris. La Hyre's designs for the series were completed in 1649 and the tapestries were probably woven under Hippolyte de Comans, who ran the workshop from 1650-1670. A set of the 'Metamorphoses', now lost, was in the collection of Louis XIV. Eleven further sets have been identified (de Reyniès 2010, p. 166). The poor condition of the present tapestry, and its lack of borders, make it impossible to attribute it to a known set. (Helen Wyld, 2012)