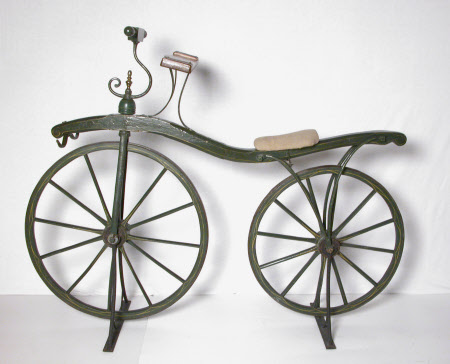 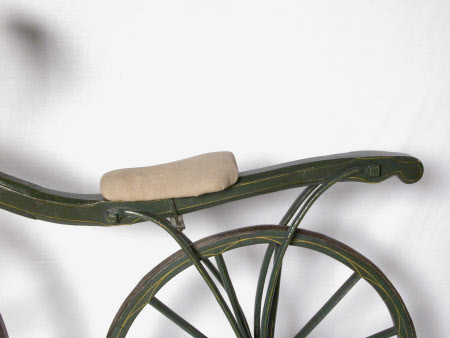 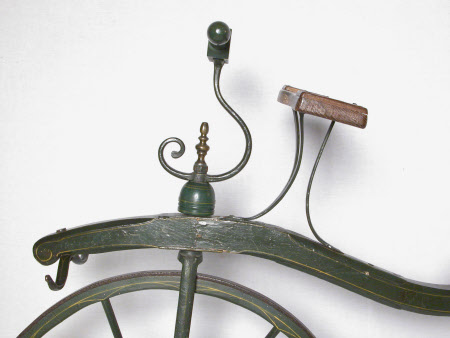 The first, two wheeled transport using human propulsion was invented by the German Baron Karl von Drais, in 1818. Pedal power came into use in 1865 on velocipedes, popularly known as ‘bone shakers’.

Bicycle - Hobby Horse with wooden arm rest over front wheel and footrest for free-wheeling downhill. Earliest form of bicycle without pedals. Wooden frame and wheels painted green lined with yellow, wheels have iron tyres. Cloth covered seat. Metal supports for rear wheel, armrest and handlebars. Ornate finial where handlebar support attaches to top of front forks. In notebook no.5, page 98 (1340945.5) Charles Wade refers to: 'Large Garret no.64. The Hobby Horse of 1818 or DANDY HORSE was patented in France by Charles, Baron von Drais in 1818 and in the same year was introduced into England by Denis Johnson, a coach-builder of Long Acre, who took a British patent for it, he described it as a "Pedestrian Curricle". A speed of as much as 10 miles per hour was possible on the level. Painted blue-green with yellow lines. fr Malmesbury, Wilts. Includes sketch with date 1818 and part of the Hobby Horse marked "replacement by CPW"'. In Gloucester Records Office, (1342628 Ref. D10423/Box 6/33) is a receipt for an old bicycle purchased by Charles Wade from C.W. Hitchings & Son, 52 Gloucester Street, Malmesbury, 7th June 1933 for £3-10s.

CPW item 64 - bought from Hitchings and Son, 52 Gloucester Street, Malmesbury, 7th June 1933, for £3 10s Given to the National Trust with Snowshill Manor in 1951 by Charles Paget Wade.