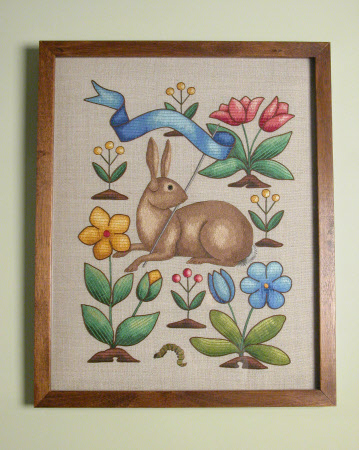 The Hare is based on an original watercolour design by Joan Lander, and the shading of colours involved makes it appear like a painting even in needlework. The Hare was one of Joan’s key exhibition pieces during her time at The Royal School of Needlework, and it was also one of the embroideries displayed at Her Majesty Queen Elizabeth (the Queen Mother)’s visit to the School in 1951.

Embroidered picture in dark wood. Original Joan Lander design of a hare, completed during her studies at the Royal School of Needlework. Silk work laid on linen ground showing shading of colours.