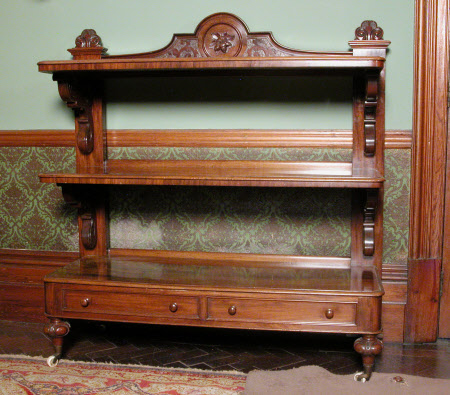 A mahogany three-tier buffet sideboard, English, second half 19th century, the tiers of rectangular form with rounded corners and moulded rims, the top tier with shaped crest with applied centre carving of flowers and leaves surrounded by a raised circle surrounded by low relief carved scrolls with stippled ground, the tiers cantilevered from two vertical supports to the rear, each support terminating with a moulded cornice topped with a finial of scroll forms, the upper two tiers on scroll-carved and pierced angle brackets projecting from the rear supports, the lowest tier above a pair of frieze mahogany-lined drawers each with cockbeading and knob handles, the base tier supported on two carved and bulbous legs to the front and extensions of the plain supports with moulded bases to the rear, all with brass caps and white ceramic castors.