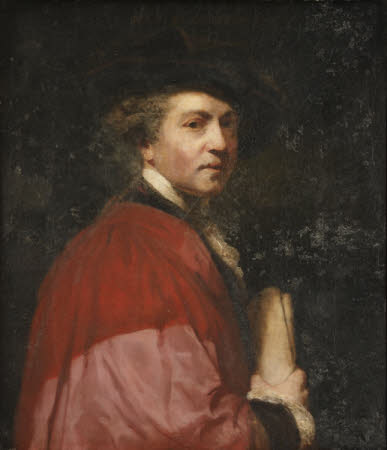 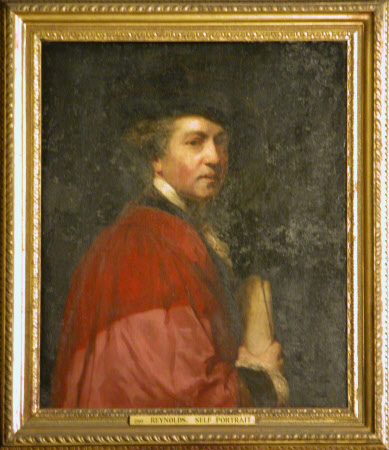 A label on the back of this self-portrait suggests that Reynolds presented it to the 3rd Duke of Dorset – a close friend and probably his most important patron of the 1770s – in 1780. However, the Duke’s account book records a payment for a self-portrait in 1778. The painting closely resembles another of Reynolds’ self-portraits in the Uffizi Gallery, Florence.

Oil painting on canvas, Self-portrait by Sir Joshua Reynolds (Plympton 1723 - London 1792), 1775-80. A half-length portrait, standing in profile to right, gazing over his shoulder at the spectator, wearing the red academic robes of D.C.L., and a black hat, holding a scroll in his right hand. Another version of this portrait, perhaps the original, is in the Uffizi Gallery, Florence.

On the lining canvas (transcribed from the original canvas?), in black script: Sir Josa: Reynolds painted by Himself / and Presented to His Grace the Duke of Dorset / in 1780; and the undated end of the list of the 3rd Duke’s pictures – apparently in London (certainly dating from 1790 or after, since it includes Mosnier’s Girl in a straw hat) – records a self-portrait, described as ‘Sr. J. Reynolds, by himself. Pt. [= part payment]’, for which £37.16 had been paid; yet it had earlier been seen by Horace Walpole in the ‘Chamber of Poets’ at Knole on 30 August 1780; and was again at Knole, in the 1799 inv., Dining Parlour: “Sir Jos. Reynolds 2 Himself”; 1828 inv. Dining Room (No.41); on loan from the Trustees of the Sackville Estate