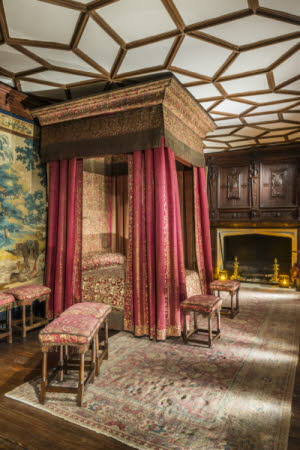 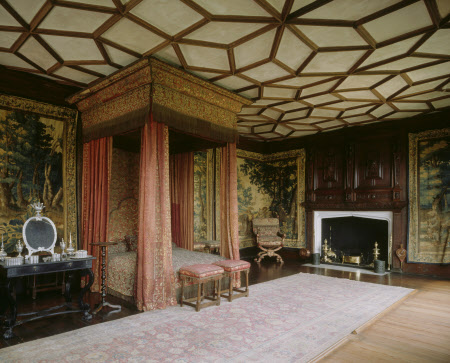 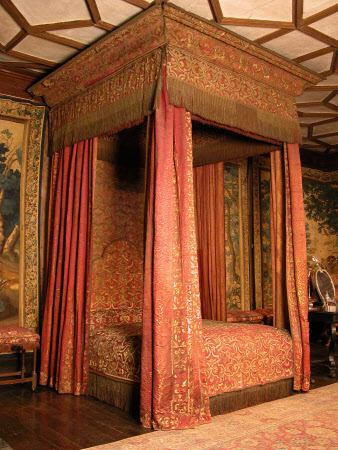 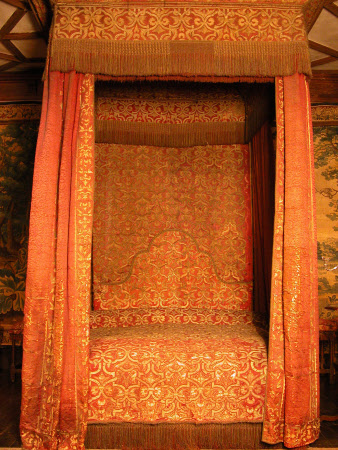 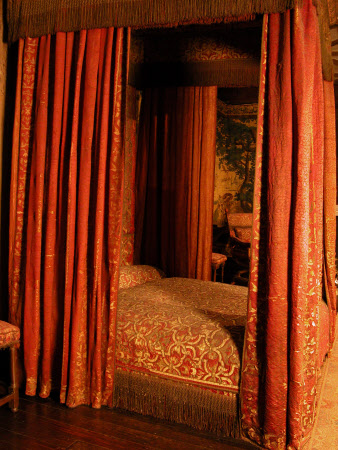 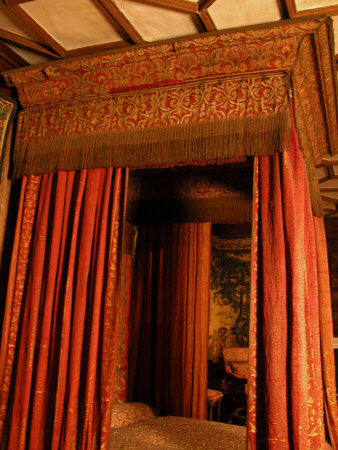 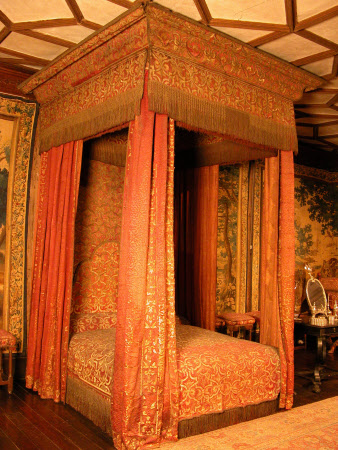 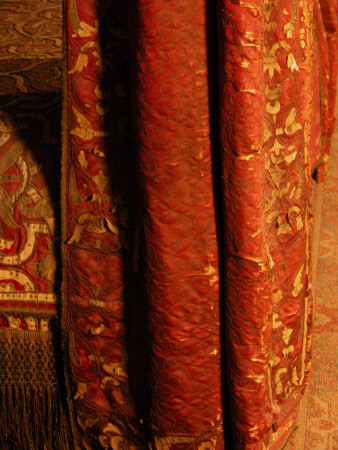 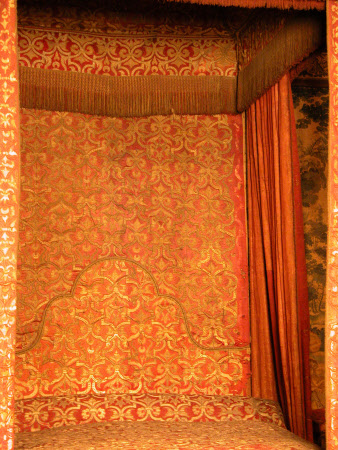 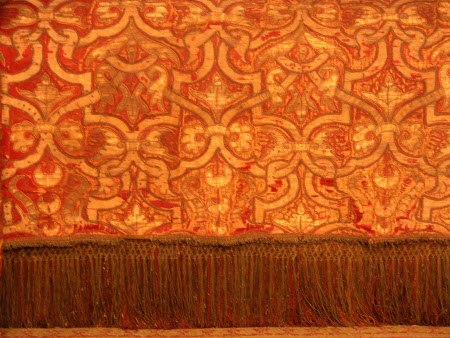 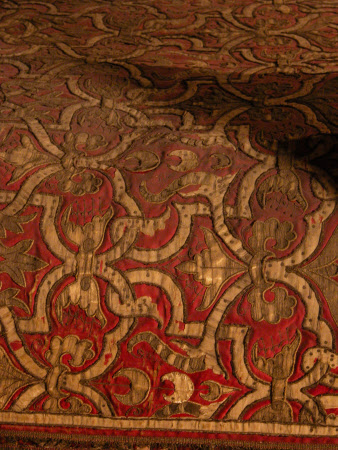 Known as the ‘Spangled Bed’ due to its sparkling appearance, this spectacular piece of furniture is covered with crimson satin, silver cloth, gold and silver embroidery and tens of thousands of sequins or ‘spangles’. It was made in 1621 for Anne Cranfield (d.1669), the wife of a courtier to James I, so that she could receive guests in style in her London house before and after the birth of her son James. Anne’s husband Lionel Cranfield (1575–1645), 1st Earl of Middlesex, served the king as Master of the Great Wardrobe and supplied the court with furnishings and furniture. He appears to have ordered this sequinned four-poster bed as part of a set, with an accompanying cradle, chairs and stools covered in the same crimson and silver fabric. The grand furniture may actually have been designed to impress the king, as James I became godfather to the couple’s child. It can be seen today in newly restored splendour at Knole, near Sevenoaks in Kent.

A tester bed, or state bed, made in 1621 by Oliver Browne and John Baker, Upholsterers to the Great Wardrobe, for Anne Cranfield, Countess of Middlesex (d. 1670). Topped by a deep, moulded cornice, above an arched headboard, all mounted and hung with a fringed upper valance, and curtains of crimson and buff silk adorned with appliqué strap-work, embroidered, fringed with gold and silver thread and studded with metal spangles or sequins.

This tester bed – with an X-frame chair and eight stools en suite – is covered with crimson satin, embellished with cloth of silver and cloth of gold, silver and silver-gilt braids, purl, file threads and lavishly adorned with spangles. These splendid textiles were probably originally made in 1621 for three canopies, a ‘Chair of State’, a ‘great Chaire’, various stools, two cushions and a cradle, for the lying-in at Chelsea House, London, of Anne, wife of Lionel Cranfield, 1st Earl of Middlesex (1575-1645), Lord Treasurer (1621-4). The godfather of their son, James, was King James I: hence the splendour of the set. Cranfield was a rich mercer and Master of the Great Wardrobe (1618), which supplied the court with furniture and furnishings. Two court upholsterers, Oliver Browne and John Baker, were involved in the commission. The set was transferred to Copt Hall, Essex, in 1625. The vast expense of such textiles demanded that they be adapted to new uses, in this case for display in the King’s Chamber. The key to the identification of the Spangled Bed as deriving from Lady Cranfield’s lying-in set is the description of the textiles in the 1674 and 1679 inventories of Copt Hall: ‘Crimson Sattin Imbroidered with Cloth of tissue with gould & ewes [eyes or spangles] lynd with read & whit damaske with a depe gould and silver fringe’. The strapwork is influenced by Turkish design. In 1637, Middlesex’s daughter, Frances, married Richard Sackville, 5th Earl of Dorset, the owner of Knole. Their son, Lionel Cranfield, 6th Earl of Dorset and 2nd Earl of Middlesex (1638-1706), entertained royalty at Copt Hall, which was near enough to London for a day trip. The ‘Spangl’d’ Bed was first recorded at Knole in 1701 and was in store in 1706. In 1783, Fanny Burney thought that the Spangled Bedroom had been ‘fitted up for the bedchamber of James I’ conveying ‘all the gloomy grandeur and solemn finery of that time’. Conservation at the National Trust’s Textile Conservation Studio has restored some of the original sparkling brilliance and is shedding light upon the long history of its reconstruction.