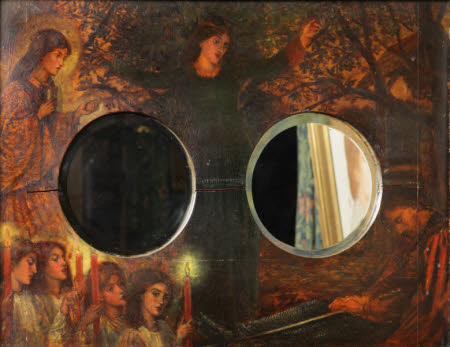 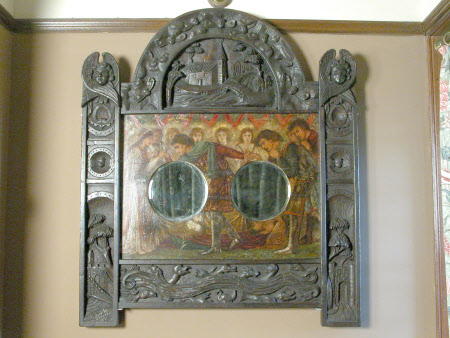 Oak, paint, and silvered glass, The Theodore Watts-Dunton Pair of Oak Wall Mirrors: How Sir Galahad, Sir Bors and Sir Percival were fed with the Sanc Grael; but Sir Percival's Sister Died by the Way (The Attainment of the Sanc Grael), by Henry Treffry Dunn (Truro 1838 - 1899), 1896-8. An oak wall mirror with two circular plates set in panel painted with scenes from the Holy Grail. In an arched carved frame depicting rural landscapes surmounted by the heads of winged cherubs. The paintings record part of the lost decorations of the Oxford Union by Rossetti. One of two pictures intended for the Oxford Union murals of 1857 which Rossetti never carried out. Dunn's version is an amalgm of Rossetti's finished ink study of 1857 (Surtees No. 94, British Museum) and the watercolour version of 1864 (Surtees No. R..1, Tate Gallery) which omits the circles representing the hall's windows (here represented by the mirrors). The subject is from Sir Thomas Malory's Morte d' Arthur. The Sanc Grael is the cup used by Christ at the Last Supper. Sir Percival's dead sister lies across the bottom of the picture.