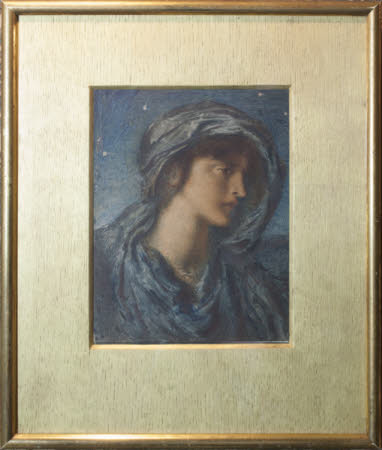 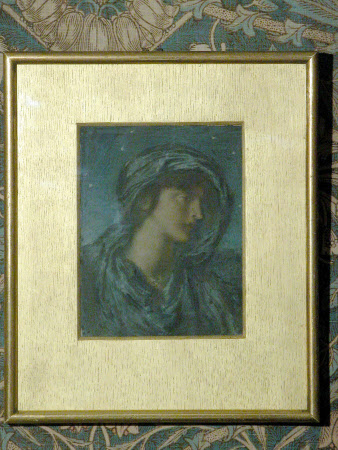 Watercolour and bodycolour on paper

Night is a reoccurring theme in Solomon's work and may relate to Solomon's prose poem from 1871, 'A Vision of Love Revealed in Sleep' in which night is female, a protector and a watcher. She is cloaked in night and appears androgynous, with masculine features.From 1870, the influence of Aestheticism (Art for Art’s sake) and the exploration of his homosexuality became more evident in Solomon's art; many of his artworks feature beautiful, androgynous male heads. Solomon appears to be questioning the nature of gender and sexuality.This picture of one of his favourite allegorical subjects is a good example of Solomon's later work. It has the characteristic composition of a figure or head silhouetted against the sky. His skill in using watercolour was noted by contemporary critics. The technique was influenced by the methods of Rossetti's circle, using watercolour and body colour together to produce a rich, dense effect quite unlike the transparent washes of conventional watercolours.Oscar Wilde's lecture in Wolverhampton in the 1880s on Aestheticism inspired the interiors of Wightwick. Wilde collected Solomon's work, therefore the purchase of Solomon's work by Rosalie and Geoffrey Mander in the 1960s may reflect this influence.

Purchased 1961 from J S Maas and Co's first exhibition: Pre-Raphaelites and Contemporaries No. 107 [this was probably the first commercial Pre-Raphaelite exhibition since 1857]; transferred to the National Trust on the death of Sir Geoffrey Le Mesurier Mander (1882-1962)

J S Maas and Co label on reverse;Pre-Raphaelites and Contemporaries 1961 No.107