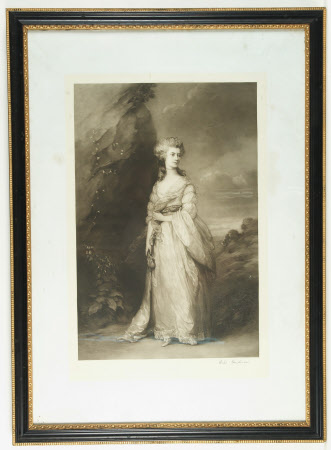 Print, engraving, Jane Clitherow, Mrs Peter William Baker (d.1816) (after Thomas Gainsborough) by possibly William Henderson (fl.late 19th/early 20th century). - Engraving from a full-length portrait of a lady in a white full-length dress with a fabric stole around her shoulders of which she holds each end with her hands. She is standing in a landscape and looks to her left, by perhaps William Henderson. In a black frame decorated with two gilt borders. The original is in the Frick Collection, New York.

Will. Henderson (signed in pencil, under image right-hand side)