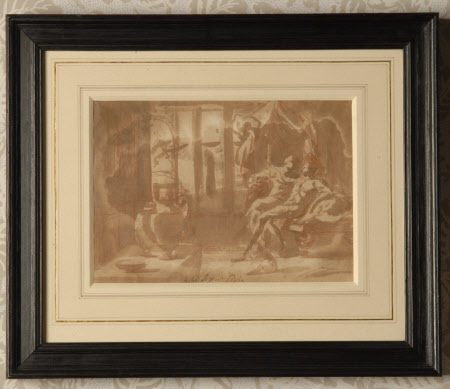 Brown wash over black chalk on paper, Possibly Venus and Mars in a Bedchamber with Cupid (recto) and Selene and the Sleeping Endymion (verso), attributed to Jacques Blanchard (Paris 1600 – Paris 1638), inscribed on recto, bottom centre: Diseg: di Monsr Posin [Poussin], 1626/27. Although inscribed in an apparently seventeenth-century hand ‘Diseg: di Mons.Posin’ and ‘di mano propria’ (‘by his own hand’), this drawing is not by Poussin, but by another French artist working in his orbit in Italy. The likeliest candidate is Blanchard, who went to Rome in 1624 (like Poussin), but spent from 1626 to 1628 in Venice, whence these and the small group of drawings to which they belong seem to have come.