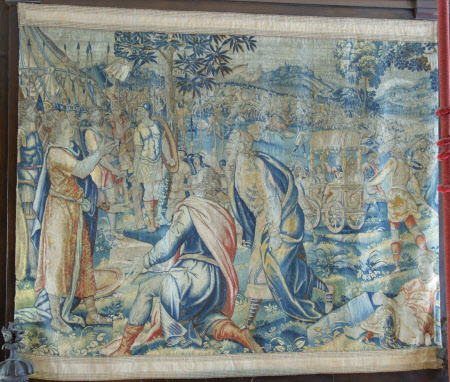 16th century Brussels tapestry with a classical scene; young person crowned, with two attendants, one kneeling; at an army camp with a cart containing a bearded crowned figure, a battle in the distance with hills. No border. 16th century. One of a set of eight by Leo van der Hecke, depicting the story of Caesar and Cleopatra. This scene has been called by Marillier 'Julius Caesar offered the Crown'.

The bequest of Margaret (Anderson) McEwan, The Hon. Mrs Ronald - later Dame Margaret - Henry Fulke Greville, DBE (1863-1942) from probate records linked with the donation of the property to the National Trust in 1943. This item found on the record for Polesden Lacey Central Hall, page 3.