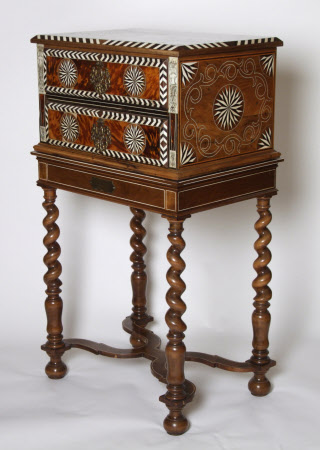 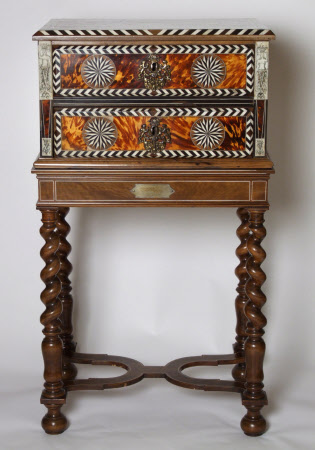 A small Spanish walnut cabinet, dated around 1700. The cabinet was a gift from the Queen of Spain, Victoria Eugenie of Battenberg to Mrs Greville. Mrs Greville often entertained Royalty and would leave £25,000 to Queen of Spain when she died in 1942.

A small cabinet or jewellery box, Spanish, constructed in the late 19th century with seventeenth century panels veneered in walnut, rosewood with ivory and ebony inlay forming geometrical borders and stars, fitted as a jewelry box, opening with a hinged top and a drawer, decorated with a pair drawer fronts veneered with tortoiseshell (probably from a Vargueno), mounted with gilt metal animal and crown key plates, raised on a modern matching stand of walnut with twist-turned legs and ball feet, the frieze mounted with a brass plate inscribed ‘From her Majesty the Queen of Spain, November 1920’.

The cabinet was a gift from the Queen of Spain, Victoria Eugenie of Battenberg to Mrs Greville in 1920. It was part of the collection at Polesden Lacey and came in to the care of the National Trust in 1942 as part of Mrs. Grevilles bequest. The bequest of Margaret (Anderson) McEwan, The Hon. Mrs Ronald - later Dame Margaret - Henry Fulke Greville, DBE (1863-1942) from probate records linked with the donation of the property to the National Trust in 1943. This item found on the record for Polesden Lacey Library, page 18.