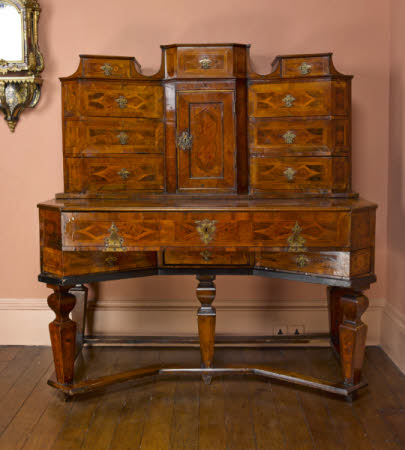 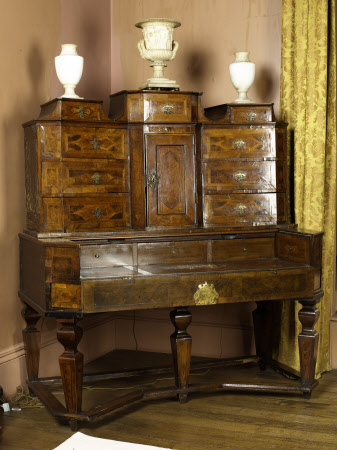 A German or Austrian writing cabinet inlaid in rectangular cross-banded panels of geometrical designs, dated 1721 and with the arms and cipher of Johann Friedrich Freiherr (Baron) von Rehlingen (1667-1725).

This bulky walnut writing cabinet, Schreibschrank or Stollensekretär, inlaid in rectangular cross-banded panels of geometrical design was probably acquired by Lord Stewart (later 3rd Marquess of Londonderry) when British Ambassador to the Imperial Austrian court during the Congress of Vienna in 1814. Of the £2,000 on furniture, which Stewart spent in the first six months in Vienna, the only cost listed for a specific object was £40 ‘for a large Office Bureau to keep the Archives and Papers of the Embassy as per Voucher no. 7’. Despite its earlier date, the present writing cabinet is a likely candidate. The central cupboard flanked by three drawers at each side, as well as the shaped cornice fitted with another three large drawers, would have provided ample room for diplomatic paperwork. When opened, the cupboard door reveals a marquetry panel inlaid with a shield bearing a cipher with the symmetrically arranged initials ‘JFR’ under a Germanic coronet and the date 1721. There is also a marquetry coat of arms beneath the same form of coronet on the sliding cover of the writing surface, which can be pulled out from the base of the superstructure of the cabinet. The quartered arms relate to the Rehlinger/Rehlingen family with origins in Augsburg and links to the Fugger merchant dynasty. The cipher ‘JFR’ is very likely to stand for Johann Friedrich Freiherr (Baron) von Rehlingen (1667-1725), Oberstsilberkämmerer (chamberlain of the silver pantry) at the court of the Prince Archbishop of Salzburg, who had estates in Mühlheim am Inn, Ursprung, Elsenheim and Gartenau. Made either in southern Germany or Upper Austria, the writing cabinet was probably brought to Vienna by one of his descendants. Indeed, Austrian and German courtiers are known to have had numerous pieces of country furniture – so-called Schlossmöbel – brought to their town houses. The handles, with Edith, Lady Londonderry's ciphers, are twentieth-century replacements. An identical example can be found on a Wellington chest in Lady Londonderry's sitting room (NT 1220619). (Entry adapted from Christopher Rowell and Wolf Burchard, ‘The British Embassy at Palais Starhemberg: Furniture from the Congress of Vienna at Mount Stewart’, Furniture History, LII, 2017)